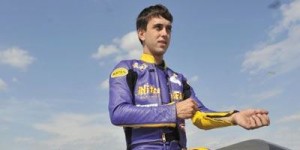 LE Tonglet, the popular racer who claimed the 2010 NHRA world championship in his first full season in the Pro Stock Motorcycle class, will not be racing his Nitro Fish Apparel Suzuki at the upcoming Amalie Gatornationals, the traditional season-opener for NHRA’s two-wheel racers. Tonglet, 24, recently fulfilled a longtime goal when he was hired by the Metairie, La. Fire Department and his rigorous training schedule will prevent him from making the Gainesville race.

“I hate to miss any races but at this point in my life, I have to start thinking about my career,” said Tonglet, who was selected out of a pool of more than 1,000 applicants to fill eight job vacancies. “I have been trying to become a fire fighter for more than a year and that dream is about to become a reality. I’m currently training and until that training is completed and I am assigned to a station, I won’t know my schedule so I’m not sure just how many races I’ll be able to make this season. At this point, I’d guess that we can still race in about six to eight races that are close to home. Working at the fire department does allow some for flexibility so in the future I could be in a position to compete for another championship. That would be the ideal situation.”

Nitro Fish owner Ken Koretsky, a supporter of Tonglet since his championship season in 2010, fully backs the team’s decision. Koretsky plans to be a part of the Tonglet team regardless of how their 2014 schedule plays out.

“First off, I could not be more proud of LE,” said Koretsky. “He’s chosen to become a first responder and I can’t think of too many professions that are more honorable than that. The fact that he’s willing to risk his safety for the good of others speaks volumes about his character and his maturity. He’s been an excellent representative of the Nitro Fish brand for the last four years and I’m happy to continue my association with him and the rest of the Tonglet family. I’ve told them that I plan to race with them for a long time and to call me whenever they have a more definitive schedule.”

Although Tonglet, a nine-time national event winner, will be missed, the familiar colors of the Nitro Fish Apparel brand will still be high visible in Gainesville. Tonglet’s father, Gary, and brother, GT, have announced plans to bring the team’s 190-mph Suzuki to Gainesville with Eddie Reed as their rider. Reed, 30, a native of Compton, Calif., will be making his NHRA debut after a successful test session with Gary and GT Tonglet.

“We’ve been working with Eddie for a little bit; giving him some experience and trying to fine-tune his riding style,” said Gary Tonglet. “He ran a 7.40 on one of our bracket bikes and it would have been a lot quicker if we hadn’t had a few mechanical problems. He’s got a very positive attitude and he wants to learn and those two things count for a lot around here. The way I look at it, we have a great bike and it’s too competitive to just let it sit around so we’re going to take Eddie to the first race and see how that goes.”