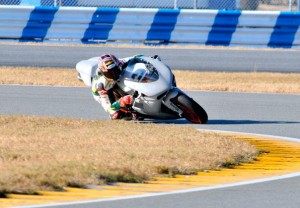 Orient Express of Brentwood New York, the official U.S. importer and distributor of K-Tech Suspension components from the U.K., is pleased to announce continued support of Celtic/Fast By Ferracci Racing over the 2011 AMA Pro Racing season. After an encouraging Daytona test with the new Ducati 848 Evo, PJ Jacobsen is preparing his attack on the Daytona Sport Bike class with new determination and vigor. The Celtic/FBF Racing Ducati 848 Evo will feature full K-Tech Suspension components, including the race proven 20DDS front fork cartridges and newly released 35DDS rear shock. Barry Gilsenan, Celtic Racing’s team owner, stated “Having K-Tech Suspension on-board the new Ducati 848 Evo motorcycles gave PJ that extra confidence to really push hard in the test. PJ spent the 2010 season working with K-Tech, and we were very pleased with the results. The 848 Evo Ducati is a new experience for PJ, and K-Tech made for an easier transition”. Tuning legend Eraldo Ferracci was quickly impressed with the K-Tech Suspension components – “Every change we made was predictable and well controlled, making setup quick and smooth!”. Young gun PJ Jacbosen is excited for the 2011 season, and returned to New York to practice his skills with some ice-riding at home – “Daytona was great! We had an awesome first ride on the 848, and I am really looking forward to 2011!”.