At AAA Texas NHRA Fall Nationals on Oct. 18, Jerry Savoie rode his Savoie’s Alligator Farm Suzuki to his third Pro Stock Motorcycle victory of 2015 with a 6.744 at 198.44 win over Eddie Krawiec. The result was the fourth career win for Savoie, the event’s No. 1 qualifier, and his first at Dallas. The win moves the alligator farmer to third in points. 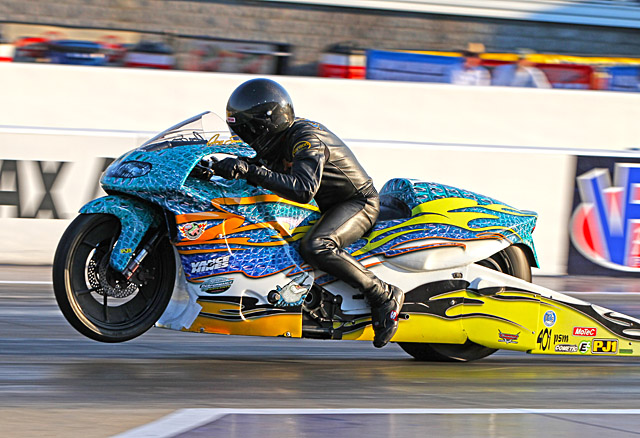 “When you’re making the power like we had this weekend, and I can’t thank Vance & Hines enough for that, you don’t want to throw it away on a red-light,” said Savoie, who moved to third in points. “We tried to set up the clutch and myself for .050 reaction times, and we ended up a bit slower than that. But we managed to get away with a couple of close ones, so all is good.”

Krawiec, who is second in points, raced past Angie Smith, Hector Arana Jr. and Chip Ellis in the earlier rounds.

The NHRA Mello Yello Drag Racing Series next travels to Las Vegas for the NHRA Toyota Nationals, Oct. 29-Nov. 1, for the fifth of six Mello Yello Countdown to the Championship events.