Is Matt Smith Headed for NHRA Championship No. 6?

It’s great news for Matt Smith racing and bad news for the rest of the NHRA Pro Stock Motorcycle class the five-time and defending class champion is apparently peaking at the right time.

Smith finished off a nearly-perfect weekend in St. Louis, round No.2 of 5 of the NHRA playoffs for the motorcycles , rolling to the win – and moving back into the points lead – on his Denso Auto Parts Buell with a run of 6.756 at 202.00 against Jerry Savoie in the championship round. Over the course of the weekend, Smith set both ends of the track record, made a career-best run, qualified No. 1, picked up his fourth win of the season – and 36th victory in his career – and took over the points lead as the top of the standings changed hands for the sixth straight race in the category.

Smith was spectacular throughout the weekend and reached the final round with wins against Kelly Clontz and Joey Gladstone, who came into the race with the points lead. Smith took it back and then led wire-to-wire against Savoie to win for the fifth time in St. Louis, which is the most in the class. 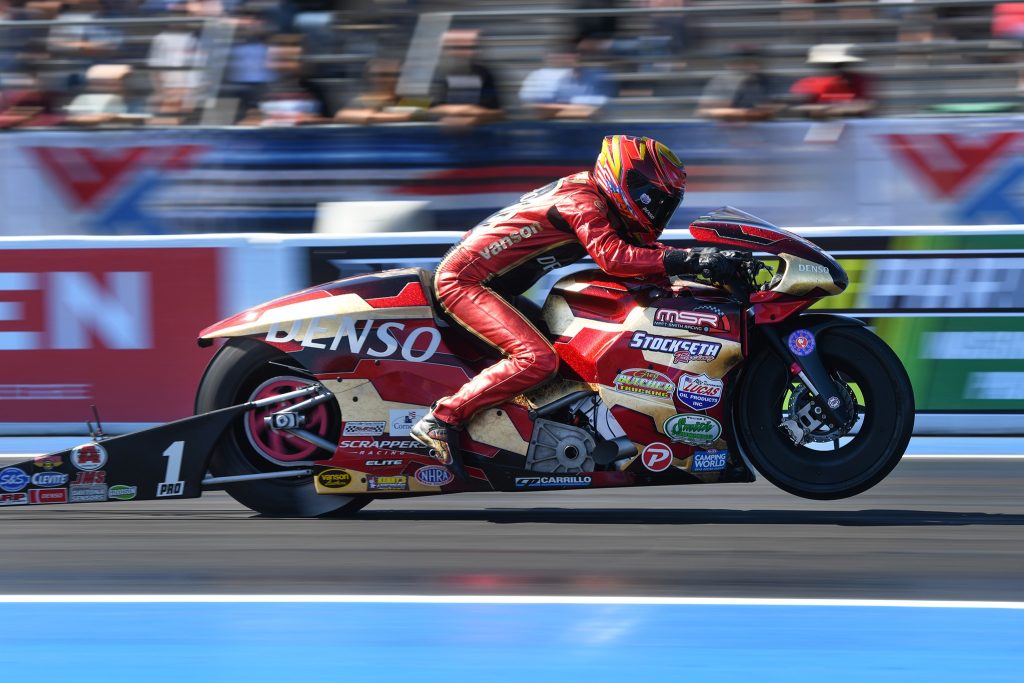 “It was a big weekend for this whole team,” Smith said. “Leaving here No. 1 and (Angie Smith) No. 3 in points was huge for the team. This whole class is tough and we’re looking forward to going to Dallas. I had my opportunity second round in Reading against Joey and messed up, so it was good to make up for that here today. What a weekend here. I love the track and the fans here, and I just love the atmosphere.”

Savoie reached the final round for the second time this season and the 32nd time in his career, knocking off Ryan Oehler, Angelle Sampey and Eddie Krawiec. Smith’s points lead stands at 21 over Gladstone heading to Dallas as he seeks a sixth world championship.

The NHRA Camping World Drag Racing Series returns to action Oct. 13-16 with the Texas NHRA FallNationals at the Texas Motorplex in Dallas.