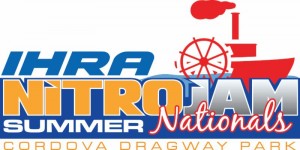 For six exciting years in the late 90s and early 2000s, Cordova Dragway Park was on top of the IHRA world.

Hosting the annual Summer Nationals with the International Hot Rod Association’s professional drag racing series from 1997-2002, the world-class facility, famous for its incredible fan and racer hospitality and blazing fast track, produced one of the premier, must-see events on the IHRA schedule.

Now, after a 12 year wait, the IHRA is finally back in the Quad Cities.
The Summer Nationals will feature one of the biggest Nitro Funny Car races of the year with more than a dozen of the world’s best drivers
Cordova Dragway Park, located on the banks of the mighty Mississippi River, will once again host the IHRA’s biggest summer spectacular as the Summer Nationals return to Illinois for three full days of drag racing action capped off with the Nitro Jam Drag Racing Series professional competition July 18-19.

Featuring one of the biggest nostalgia Nitro Funny Car races in the country, plus action in Nitro Harley, Nitro Altered, Pro Stock, Jet Dragster and more, fans will be in for a treat when the IHRA returns to Cordova Dragway Park for a massive celebration of all things drag racing.

“Having this event back at Cordova Dragway Park is a big win for the racers, fans and businesses in the Quad Cities area. It has been more than a decade since the IHRA last raced at Cordova Dragway Park and I am thrilled to be able to bring this unique and exciting event back to Cordova,” said Scott Gardner, President of IHRA Motorsports and former manager of Cordova Dragway Park. “This event, coupled with an already stellar lineup of great racing events held throughout the year, will only help elevate the tracks reputation as a leader in providing world class motorsports entertainment in the Quad Cities region.”

Race fans will enjoy over two dozen nitro-powered race machines when IHRA returns to Cordova Dragway Park as the track hosts competition in Nitro Funny Car, Nitro Harley and Nitro Altered, plus racing in the powerful mountain-motor Pro Stock division, the world’s only Jet Dragster class, a full weekend of sportsman racing with the Summit Racing Equipment Pro-Am Tour and more.
Ron Hope will bring the fire burnout to Cordova Dragway Park
And this year, every lap matters as the stars of the Nitro Jam Drag Racing Series push their machines to the limit in their chase for the 2014 IHRA World Championships. Already this season, IHRA fans have witnessed multiple records in three professional classes shattered by the intense competition.

Among the record-setting performances in 2014 have been great showings from IHRA’s Nitro Funny Car class, made even bigger at the Summer Nationals as Cordova hosts one of the biggest Nitro Funny Car races of the year.

IHRA’s only completely open field will welcome more than a dozen of the fastest Funny Cars in the world trying to make an eight-car field and take home one of the most coveted trophies of the year.

“While all of the classes present something unique and exciting, there is no denying the star power of the Nitro Funny Car class at Cordova,” Gardner said. “We are going to have the world’s best in nostalgia Funny Car racing gathered in one spot competing for, what I believe, will be one of the most sought after wins in the history of this class.”

California native Jason Rupert currently leads the IHRA Nitro Funny Car championship standings in the Bays and Rupert “Black Plague” ’69 Camaro coming off of four Nitro Jam victories in the first six races and a brand new elapsed time record set in North Carolina earlier this year. Rupert will be joined by fellow 2014 Ironman winners John Hale in the “Mike Burkhart” tribute Camaro and Mike McIntire Jr. in “McAttack” Camaro, along with former Cordova finalists in Top Fuel from the early years in Bruce Litton and Paul Romine, both of which will be entered in Funny Car at the Summer Nationals.
The Summer Nationals take place July 18-19 at Cordova Dragway Park
Other drivers scheduled to compete in the Clash at Cordova include “Mr. Explosive” Mark Sanders, Tim Boychuk in “Forever Forward,” Ronny Young in the world famous “Blue Max,” Mike Halstead in “Candies & Hughes,” Marc White in “Flashback,” Shawn Bowen in “Violator,” Bazz Young in “Down Under Thunder” and more.

Also making history in Cordova will be the debut of the world’s only Jet Dragster championship program being contested by the four fastest women in drag racing – the Larsen Motorsports jet team. This four-car team is made up of four very talented female competitors with vastly different backgrounds. From a 19-year-old college student, to a female test pilot and an entrepreneur who holds the operation together, the team will compete in 300 mph, side-by-side jet-powered drag racing action.

IHRA’s other nitro divisions will include Nitro Harley and Nitro Altered, two radical and extreme classes that are among the most popular in the world for their death-defying competition.

Among the special attraction’s at this year’s event will be a once-in-a-lifetime fire burnout, just like the ones done in drag racing’s glory days, performed by one of the sport’s all-time greats in Hope.

Wrapping up the professional competition will be the thunderous Mountain Motor Pro Stock division. With powerful 800+ cubic inch powerplants guiding these cars more than 220 mph down the quarter-mile, the intense competition between the Black Diamond Motorsports team, consisting of Kevin Bealko and John DeFlorian, and the Goforth Racing Team, made up of Cary Goforth, Dean Goforth and Todd Hoerner, will resume, alongside former IHRA champion Pete Berner, two-time event winner this season John Konigshofer and more.

In addition to all of the on-track action, the 2014 IHRA Summer Nationals will feature an all-new and fully interactive Fan Fest pit experience. Fans can tour the pits, meet the drivers and take part in a number of fun family activities including the Larsen Motorsports Jet Technology Center, a hands-on look at the design and technology behind a jet-powered racing team, and the Hollywood Cars of the Stars featuring real cars from famous movies and television shows such as the General Lee from Dukes of Hazzard, the DeLorean from Back to the Future, the Batmobile from the 1960s Batman television series and more.

In addition to the professional action, the Summer Nationals will also include two full days of sportsman racing competing on the IHRA’s Summit Racing Equipment Pro-Am Tour presented by AMSOIL. Racing for that series will take place Saturday and Sunday.

Tickets to the 2014 IHRA Summer Nationals can be purchased in advance at www.nitrojam.com or at the gate day of show.