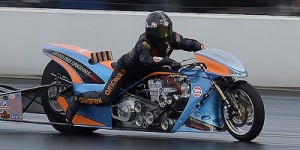 The Gulf Oil Dragracing – Grand Prix Originals Top Fuel Bike team suffered a significant setback in their quest for
the 2012 European Top Fuel Bike Championship after suffering problems when preparing for their first round elimination run.

Despite concerns about the weather again affecting qualifying at this second Swedish event on the calendar, the
forecasts proved wrong when two full days of qualifying on a well prepared track were available to the large number of competitors.

Using their four qualifying runs to experiment with different settings the team gleaned much need data and
qualified solidly in second place with a 6.23 secs. @ 220.17 mph.

Ordinarily the team would have been slightly disappointed at not achieving number one position, but after a blistering World
record pass by the local STARTA Racing team of veteran Top Fuel Bike rider Peter Svensson this was a satisfactory mark.

First round saw King with lane choice against the impressive team of Nils Lagerlof who had hastily rebuilt the front end of
his machine after a hard excursion into the boundary wall in qualifying.

However, disaster struck for the championship leaders when their machine failed to fire up correctly due to a failure of an
electrical component, an ignition crank trigger.

The team could only watch on as the number two in the points table took an unopposed bye run into the semi finals.

The team next travel next to their home track of Santa Pod, UK on the 6-9 September for the finals of the European Championship for an exciting season finale with four teams able to
assume the Championship title depending on the outcome of the race.

The
team is extremely proud to be supported by many leaders in their chosen markets
in their challenge for the 2012 European Championship:-

GATES
– The world’s most trusted name in drive
belts, hoses and hydraulics

GOODRIDGE
– The most innovative and the best in
fluid transfer systems

GRAND
PRIX ORIGINALS – The brand for drive and lifestyle, past and
present

PUMA
ENGINEERING – Manufacturer of the world’s most powerful
motorcycle engines

VANSON
LEATHERS – The most iconic brand
in motorsport leather goods

For more on information on King Racing,
visit www.kingracing.com