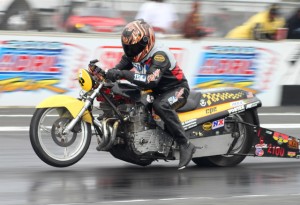 The highlight of the weekend had to be Jeremy Teasley’s DME Real Street 7.79 ET record pass on the Adams Performance/RS Motorsports Kawasaki ZX14. That happened on practically the first lap of the season, as Teasley became the first Real Street rider to break into the .70s on his first qualifying lap. Wild wheelies in rounds 2 and 3 showed that tuner Roger Starrette was aiming for the moon, but Rockingham’s knowledgeable railbirds knew that Starrette would reign the blue beast in for raceday to get down the track and back up the record in the process. And that he did with a 7.812 on a round 1 bye. Teasley beat Delaware’s Joey Gladstone 7.84 to 7.97 in the final. 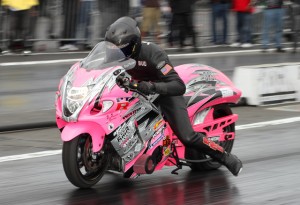 When Yoder won that Grudge race on Saturday night, he was riding Heath’s “Wigsplitter” Orient Express Pro Street bike originally built by Detroit’s Ronnie Mitchell. By day, Yoder rides Mitchell’s own hot pink “Rizzo” Suzuki Hayabusa in Pro Street. Yoder qualified #2 for his “day job” behind defending class champion Rodney Williford’s redhot 7.182 at 201.19. But Williford gave up the tree to Teasley and his nitrous huffing Pro Street ZX14 in the semi. Williford then spun and was unable to catch Teasley, who lost the final to Yoder.

Mickey Thompson Pro Mod made its MIRock/Rockingham debut, with local hero Ronnie Procopio taking the 4.19 to 4.30 eighth mile win over Virginian Eddie Gonder. One of the highlights of the weekend was 14 time champion Billy Vose hopping onto the ancient mount of “Mudfoot” MacArthur. Vose carried the vintage 1998 Timblin chassis to its quickest-ever 4.22 on Saturday night, then dropped that to a monster 4.11 in Sunday’s warm-up. But somehow the carb strap got sucked through the engine in the semi and the unlikely pair’s improbable march on the field was ended. 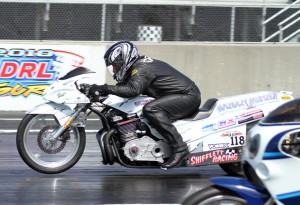 Schnitz Racing Street ET was won by Clay Davies over Larry Pierce on Saturday and Michael Herman Jr. over Glenn Glass on Sunday.