Electric vehicles are here to stay and they are invading drag racing in a big way. Nearly a decade after Top Fuel Motorcycle legend Larry “Spiderman” McBride established the ET record at 6.94 on a Lawless Industries / Orange County Choppers electric drag bike, the Danish built machine of Hans-Henrik Thomsen has seized the electric ET record of 6.86 at Santa Pod Raceway.

McBride and electric dragster racer Steve Huff, who became the first electric car racer to eclipse 200 mph earlier this year, amazingly, are locked in a dead tie for the record at 201.37.

Henrik Thomsen sent along the following on his record-setting weekend –

The Danish drag racing team, True Cousins and their electric motorcycle Silver Lightning, have just returned home after a both nerve-wracking but also extremely successful effort at the English Santa Pod Raceway during the event “NOT The Euro Finals”.

On the 3rd last attempt (out of 9 possible) the team managed to beat the 8-year-old record over 1/4-mile (402 m) for electric vehicles, which stood at 6.94 sec. The driver was, as always, Hans-Henrik Thomsen, while it is Glenn E. Nielsen who has built the speed monster on lithium batteries, Silver Lightning. 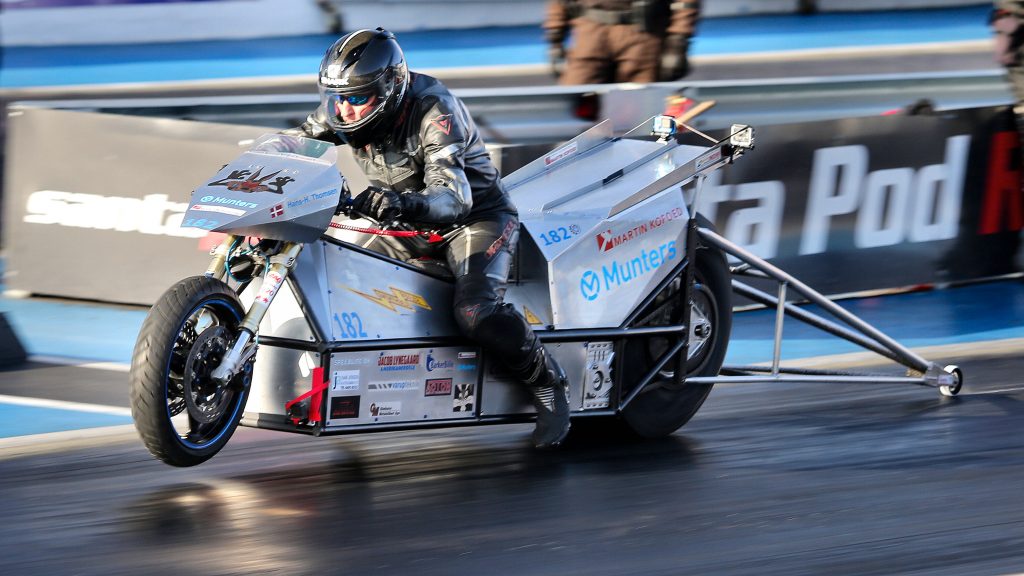 Problems
But there was not much to suggest that it would turn into a record after the first 6 attempts on Friday and Saturday. Best time until then was 7.15 sec. and the characteristics of the track were very different from the tracks that the team is used to be driving on in Sweden. The phenomenon of “tire shake” (the rear wheel deforms and jumps) lead to bringing the Silver Lightning too far to left the side of the track while there were violent shakings the first 200 m down the track – both were an obstacle to getting further down in time. 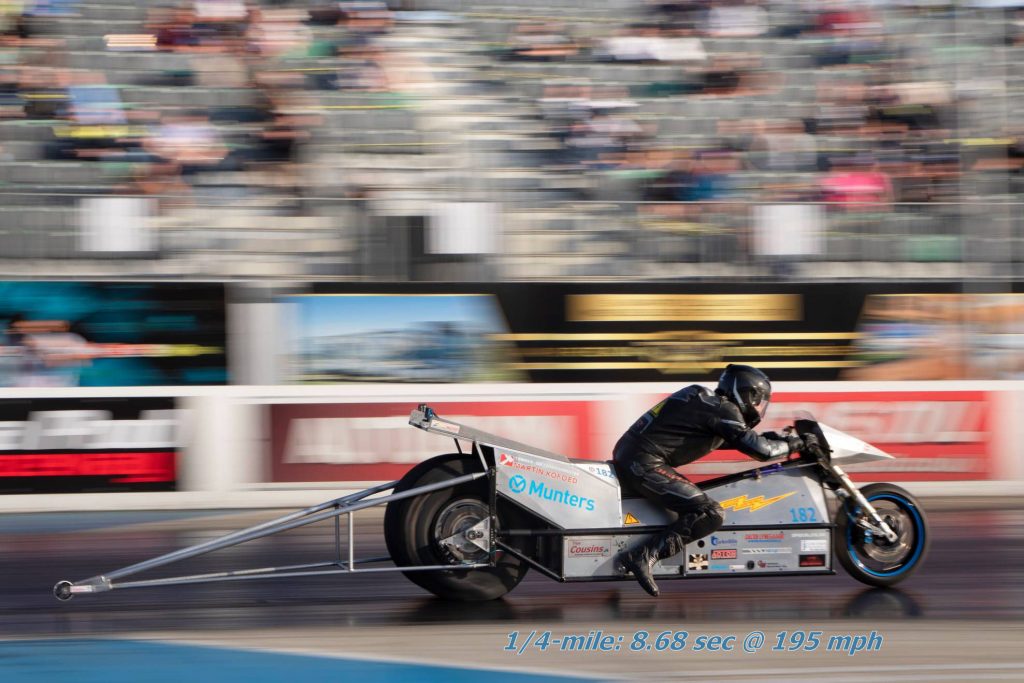 Tire shake can be quite difficult to get rid of, so good advice was needed, but luckily the 10-time European Champion in Top Fuel Bike, Ian King, came to rescue the team. It was now not entirely coincidental, as Hans-Henrik had already before the trip to England agreed to get the legend to visit in the pit in all circumstances.

By showing Ian videos and datalogs, he was able to more accurately explain to the team members what the problem was and give advice on what was needed to change before the last 3 races on Sunday. A plan for the settings was agreed and then it was just to try again… 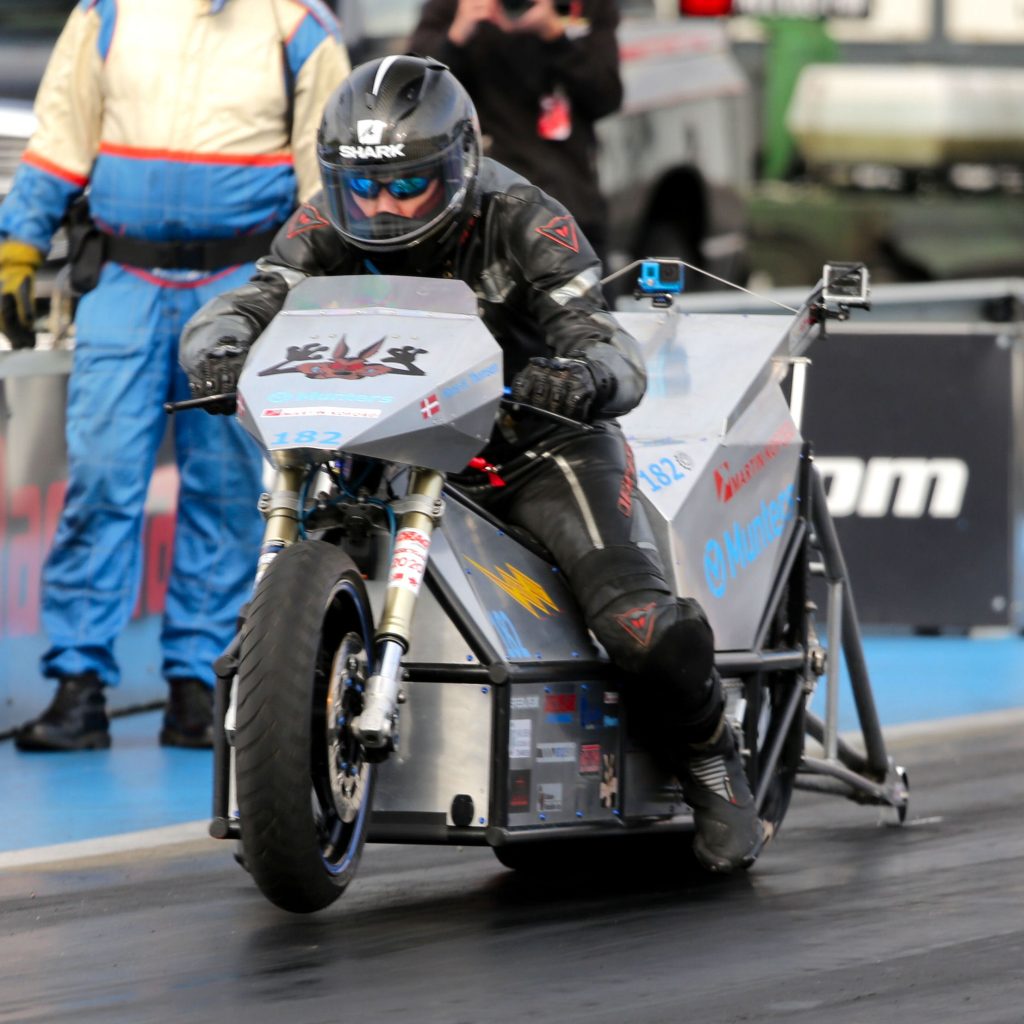 Success!
And already the first race on Sunday noon turned into a new, preliminary world record of 6.87 sec. and 191 mph over the line! Silver Lightning could now get on the right line (down the track) much earlier and tire shakes were reduced so much that the record run could be completed without drama. The British audience (“only” about 5,000 due to Corona restrictions) had already proved to be excellent and they were elated – especially after seeing 6 futile attempts in a row – when the record finally came (as video below also shows).

After a failed attempt afterwards with increased power, which only turned into wheel spin due to too much power / too high tire pressure / lack of grip, it was time for the very last attempt. With one last hope of an improvement, the power was put down a bit again and the tire pressure was lowered to 9 psi. After an excellent start with approx. 80 m on the rear wheel, Hans-Henrik missed a bit when the throttle due to the many vibrations slipped in the glove, so that for 1.5 seconds the power was down 20% compared to full throttle. But still the record was improved just a bit to 6.86 and a nice 195,4 mph. Datalogs subsequently showed that the time would probably have been a 6.7x time if it was not for the missed 20% of power, but that must be seen in the coming season. 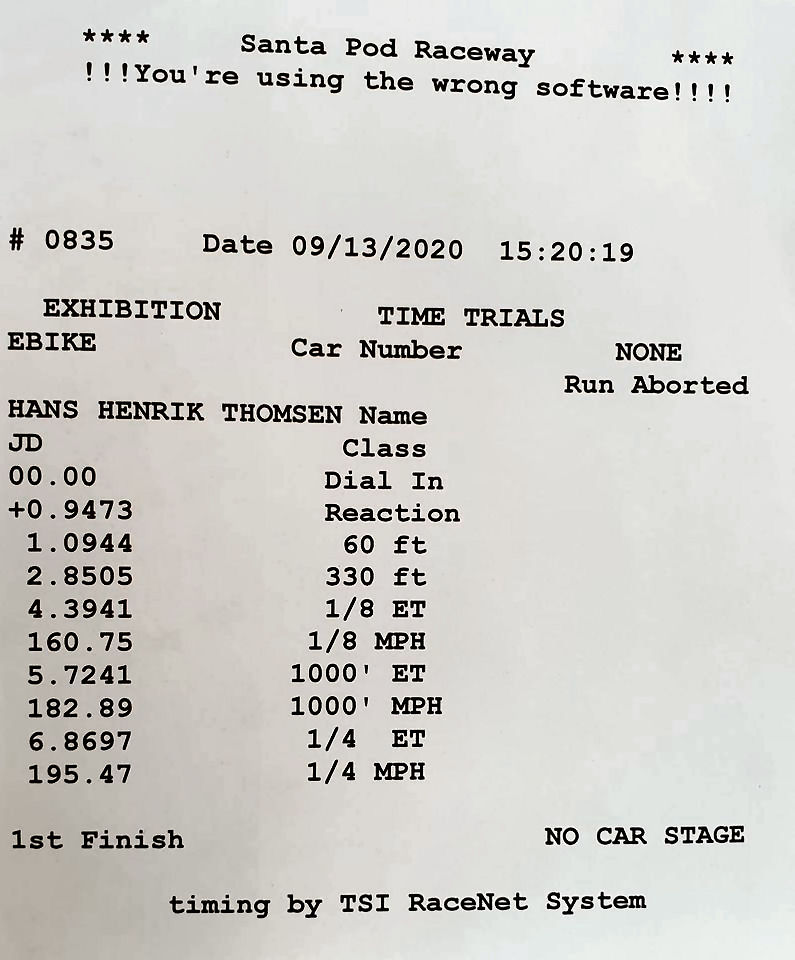 Comments
“We would like to thank the owner of the Santa Pod course, Keith Bartlett, for the invitation to an excellent event and the British audience, who were very surprisingly interested and enthusiastic about the bike” says Hans-Henrik, who also mentions that the previous record holder Larry “Spiderman” McBride already has sent his congratulations, which is very nice and also supportive gesture. “He actually wrote that he would like to see us run a 6.70 time, so of course we have to go for that”.

Glenn E. Nielsen was also enthusiastic about the result, but also about the course and the conditions and he says: “We have already been asked by the course owner, Keith Bartlett, if we will come back next year. And who knows, maybe we can also have our other electric drag vehicle, the doorslammer TC-X, which, however, will be going to undergo a major rebuild during the winter. ” 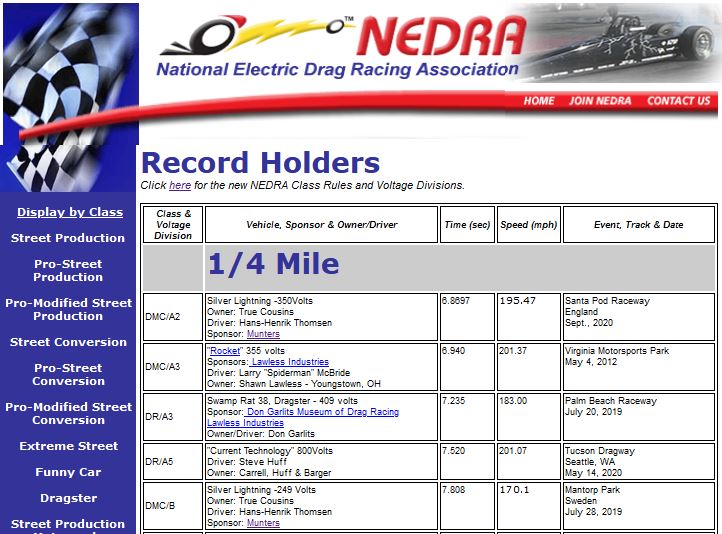 Perspective
With a 4.37 on the 1/8-mile already set (during the 6.87 run) and combined with some upgrades and a changed gearing, a 4.2 or even maybe a 4.1 time could be possible. This would get Silver Lightning quite close to the big ICE dragbikes – and so things could begin to be really interesting. With no gears to change, no clutch to operate during start, just pure torque from the start line, an electric dragbike this powerful will not be more difficult to run and consistency would be better than most of the ICE bikes..