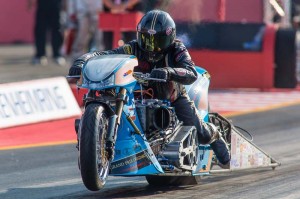 After last year’s track surface problems the 2013 NitrOlympX sported a partially resurfaced track. However, it was (understandably) a little green at its first (and only) major event on the calendar. However, the Santa Pod track crew who were directing the track preparation made the best of the situation and all races were finished safely and on time.

A second event win for the year placed Ian King in a strong position to secure a seventh championship at Santa Pod in two weeks time. However, it wasn’t totally plain sailing as two qualifying shots were lost due to tyre smoke and another went awry when King hooked right from the start line and suffered (as many others did) a disappointing change in track camber caused by the resurfacing. 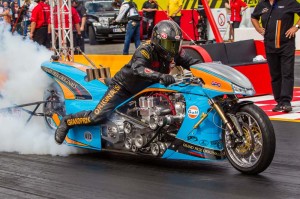 However, the one that did count was a fine 6.175 second pass, good enough for low qualifier and event low ET and handing him a bye before a semi-final match-up against Otto Knebl. The Czech Republic rider ran a new PB and first ever six second pass on his ex Brian Johnson Puma Yamaha, but it was not good enough to overcome King’s early shutoff 6.49 secs.

The final was a familiar matchup against Swede Rikard Gustafsson on the world class Funnybike who was duly dispatched by a close but again early shutoff 6.421 secs. @ 219mph after King elected to use the more tricky but aptly titled Grand Prix Originals lane to take the event win.

Two wins in a row in a four round series has put King two elimination rounds ahead of the Swede in the points, but it will be all to play for at the European Finals in two weeks time.

Our thanks to Marcus Moller for his YouTube video of the Final runs – http://www.youtube.com/watch?v=tqtmFxlsHuo

The King versus Gustafsson Final can be viewed at around 1 minute and 10 seconds.

The team will be defending their FIM European Dragracing Championship crown at the final European Championship round, the European Finals at Santa Pod Raceway (UK), 5th-8th September

The team is extremely proud to be supported by many leaders in their chosen markets in their challenge for the 2013 European Championship:-