Just break your watches now, because this weekend’s NHDRO World Finals and Grudge Spectacular is gonna be long and action packed. “Your money’s worth” won’t even begin to describe what this motorcycle drag racing speedfest will deliver for fans and racers alike. 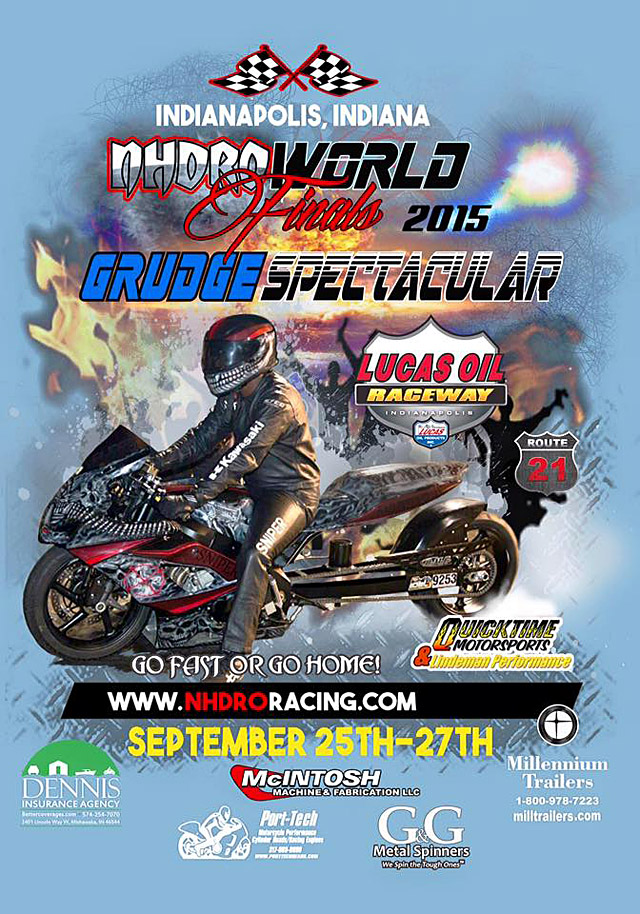 And NHDRO is no parade of shakedowns. Everyone who was in Louisville remembers how many races went down. If you weren’t there, your grudge cred can be saved by filling your jar, packing the conversion van with your best friends and finest ladies, and making your way to Indianapolis on September 25-27 for this one. 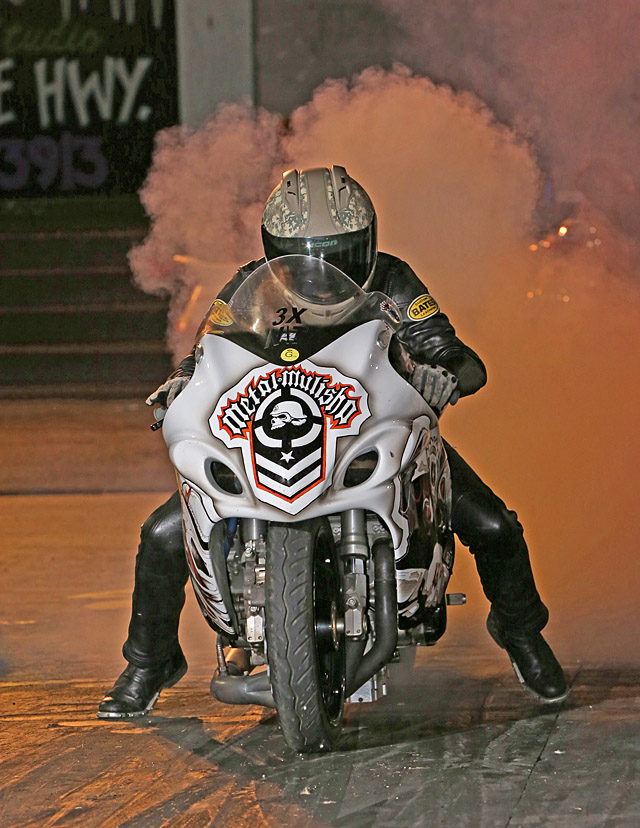 The Grudge Spectacular isn’t even half the story of what’s going down this weekend. There will be two complete NHDRO races after most of Sunday’s competition at August’s Summer Celebration was washed out.

First and foremost, that means two complete McIntosh Machine & Fabrication Pro Street races. Mark Paquette and his turbocharged Suzuki Hayabusa f-ing lit it up in August with a number one qualifying 6.841 at 205.72 mph. Jeremy Teasley was right behind with a 6.845 at 208.68, followed closely by Paquette’s teammate (and points leader) Bud Yoder’s 6.88.

Richard Gadson and the 35 year-old old school, nitrous, air-cooled Suzuki GS of Brad Mummert were a bit behind with a 6.97 at 201. But Gadson and the bike stepped up big time in Saturday night’s Dunigan Pro Street Shootout with a 6.89. With both motors being repaired, Mummert’s bike is a “maybe” for this weekend. But Brad is burning the midnight oil and hoping to have everything buttoned up in time to blister Indy again.

Frankie Stotz will have his little Honda back on the bottle…No, the lifelong turbo racer isn’t going nitrous, he’s going back to alcohol. “It’s making crazy power,” Stotz says, but can he keep it from bursting into invisible flames again?

Rudy Sanzottera, Ryan Hable, John Chant, Gabe Frederick and gobs of others will be sending the planet’s sickest professional no-bar bikes down Indy’s 1320.

Gadson followed up his Louisville Pro Comp eighth mile win with a number one qualifying 4.15 on Jeff Jones’ nitrous-huffing “Fast Times Motorsports” PXM Suzuki in August. He’ll face Hoosier Ron Maddox when the rain-out is run this weekend, while Chris Cutsinger and Keith Lynn face off in an all-Hoosier, other half of the ladder.

These bikes will race again on Sunday in what 61-year old veteran Funnybike/Pro Comp champion Keith Lynn says will be his last race as he eases into retirement. Is his octogenarian crewman Leonard Drook getting sized up for a new pair of Bates Leathers so that he can take over?

Louisville’s Deshaun Wheeler qualified number one with a 4.602 in Quicktime Motorsports/Lindeman Performance Pro Ultra 4.60 eighth mile index back in August. Points leader Brevin Bond struggled in last place with a 5.23. Everything is on the table when the world’s quickest motorcycle index class fires up this weekend.

Perennial Route 21 Top Gas champion Greg Mallet is the points leader going into this final double-header weekend, but close behind is Kounselor Kenny Schwartz. Can Mallet bring down the gavel on Schwartz’s ambitions?

John “Spooky” Markham is fourth in Super Comp points but leads Streetfighter 9.50 by a scant 2 markers. Shawn Books and Dustin “Tennessee” Lee are right behind and Norwalk star Kevin Adams is making a late season charge.

Dennis Insurance Street ET points leaders read similar to Crazy 8s, with Lee ahead of Knight, Brown, Stephen Knight, Arnold and Adams. Who will be paying for dinner at the end of this one?

And throughout the weekend, Brian and Niki Welch will see that entertainment flows in the way that only NHDRO dares offer. There will be live music, DJs, and of course, the Big Wheel/Strider race. What technological advantages will these kids and their type A dads bring to the track this weekend?

This is the Midwest’s last big motorcycle drag racing event of the year. You do not want to face the long, cold winter without having been a part of this hot, marathon event. The weather forecast looks perfect and you know NHDRO will deliver.