For White Alligator Racing team, it’s Nice to Have Options 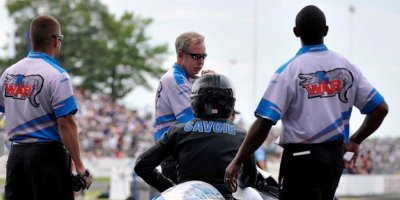 This much is certain: Jerry Savoie and the White Alligator Racing Pro Stock Motorcycle team will be in action at this weekend’s O’Reilly Auto Parts Route 66 NHRA Nationals in Joliet. What is a bit less clear is whether Savoie will be riding the S&S-powered Buell V-twin that he’s been aboard at each of the season’s first four races, or the four-cylinder Suzuki that carried him to an eight-place finish in 2011. That decision hasn’t been made yet and likely won’t be until the last minute.

“It’s always nice to have options and right now, we’ve got two good ones,” said crew chief and engine builder Mark Peiser. “I expect that our Buell is better right now than it has been, but last year’s Suzuki is pretty stout. We’re going to spend the next couple of days at the shop [in Indianapolis] working on engines, and then we will decide which is the best way to go. I’m kind of leaning in one direction but at this point, I don’t want to say which way that is. All I can say is I’ll know by the time we unload the trailer on Friday morning in Joliet.”

At times this season, Savoie’s Buell has been effective, and the team has made steady progress with the unfamiliar combination, but it has yet to yield a round-win. By comparison, the team collected five round-wins through the first four events of the 2011 season and was solidly in seventh place. While the long-term plan appears to favor the Buell, a short-term solution might just rest with the Suzuki. In other words, it might be wise for the team to take one step backward in order to take two steps forward.

“In the Suzuki, I know what I have and that’s a pretty fast motorcycle,” said Peiser. “The Buell appears to have a lot more upside, but at this point, we haven’t been able to find it. The Buell is a work in progress but we can’t afford to let too many opportunities slip away. Of course, we also have to look at things like the weather. That could sway our decision one way or another. Either way, I’m looking for us to have our best race of the year.”

Savoie is currently ranked 13th in the NHRA Full Throttle points standings but the upside is that he is just 44 points out of a coveted spot in the top 10, a deficit that could easily be overcome with just one successful outing. With 20 points available for a single round-win, he could conceivably move into the top 10 with a semifinal showing.

“We dug ourselves a pretty big hole, but it’s not too late to climb out of it,” said Savoie. “One or two good races and everything will be just fine, and I know we’re capable of that. We’ve had some bad luck as far as parts breakage and a few other things that just haven’t gone right. We really just need for our luck to improve over these next few races and we’ll be okay.”