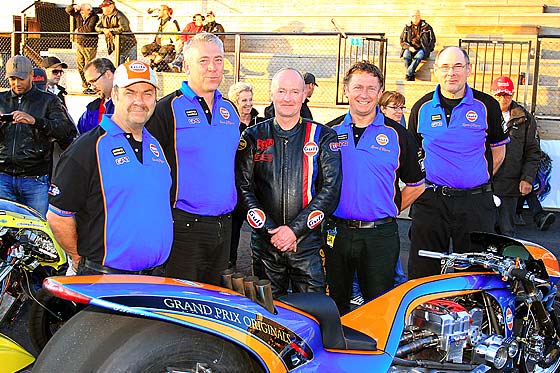 British rider Ian King and his Gulf Oil Dragracing – Grand Prix Originals Top
Fuel Bike team followed their win at the Queen’s Diamond Jubilee weekend with
another strong showing at the second round of the European Dragracing
Championship at the impressive Tierp facility in Sweden.

However, in
what is becoming a familiar situation this year, the team were thwarted in their
quest for much needed on track experience as they continue the development of
their advanced Puma machine. Miserable weather conditions forced the
cancellation of day two of qualifying and the team had to settle for number two
qualifying position going into eliminations day achieved with a slowing 6.62 @
201.19mph on the second run of day one after the powerful machine got somewhat
wayward mid track and King sensibly rolled off the throttle.

Eliminations day dawned
grey and wet. It looked as if the event was going to be cancelled as persistent
rain continued until mid afternoon when the hard working track staff’s work paid
off with breaking sunshine and a dry track. King’s first round saw him line up
against his final round opponent from the previous event, Sweden’s Rikard
Gustafsson on the impressive Pro1 Puma Suzuki. However, it was not to be for the
young Swede when a problem saw him dragged through the lights in stage and a
resultant redlight. King took a lazy green and progressed through to the
semi-finals with another slowing 6.66 @ 206.11 mph and the benefit of a bye run
due to the vagaries of the progressive ladder system. 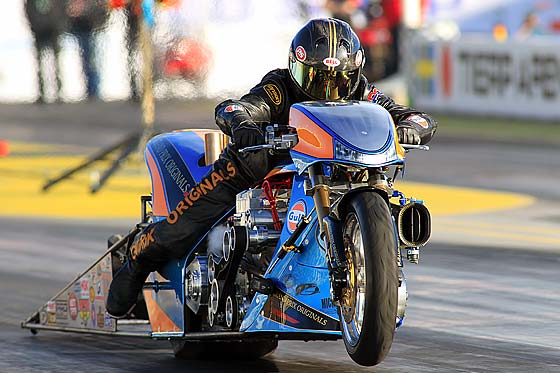 King chose what
seemed to be the favourable right hand lane for his semi final bye run, and had
agreed with Crew Chief Michael Beaumont to make a test launch and shut off at
mid track. However, when King launched he sensed the track was up to more than
he had previously been able to throw at it and nailed it almost all the way down
the track to a crowd pleasing and personal best ever run of 6.10 @ 223.99mph to
set up an exciting final against local hero Peter Svensson who was on his own
record breaking weekend.

Beaumont arrived at the top end all smiles to
collect his bike and rider with what seemed a comfortable position going into
the finals. However, disaster struck on the tow back when the chain broke and
jammed in the chassis, delaying their return to the pits and the looming finals.

And matters got worse when the team discovered the tyre had chunked and was
missing rubber with no time to change that and the chain.

A frantic
turnaround of the bike in the pits saw Zodiac Racing’s Job Heezen, Ton Pels and
Vincent Pels helping to remove and replace the chain whilst the team went about
their regular servicing duties. But, with no time to replace the ailing tyre the
team went to the line with some trepidation.

However, despite one great
pass in qualifying that assumed his number one position in the ladder (and one
half of a potential new European record) Svensson had failed to reproduce in his
two rounds of eliminations, and was the beneficiary of a no show from Nils
Lagerlöf in the semis that saw him shut off when his machine veered towards the
centreline in what could have been an upset for the current record holder.

King’s
6.10secs in the semis saw him with lane choice and the chance to run in the
favourable right hand lane. He had it all to do against the home favourite who
was in with a chance of establishing a new record if his form could return for
the final and it was a tense affair as King took both prestage and stage lights
first and waited for Svensson to follow. The tree ran and King was off and ahead
with a substantial hole shot and what seemed could be an unassailable lead for
the first 100 metres or so. However, King’s machine seemed to be suffering from
lack of grip and got into a violent mid track wobble that saw King get off the
throttle as Svensson powered past to take the event win (and reset the European
record).

The
team next travel to Alastaro, Finland for the third round of the championship
intent on improving their points lead.

The team are to contest all
remaining rounds of the premier international championship in motorcycle
dragracing, the UEM Dragracing Championship:-

For more information on the European
Championship visit www.speedgroup.eu

The team is extremely proud to be
supported by many leaders in their chosen markets in their challenge for the
2012 European Championship:-

For White Alligator Racing team, it’s Nice to Have Options