For Sale – The Quickest Dragbike in the World 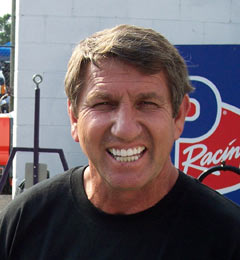 Jimmy “The Hulk” Brantley is taking a hiatus from racing and putting his 5.80-proven Top Fuel dragbike up for sale.

Brantley, who owns his own business specializing in land drilling, has become involved in a very large project and has determined he won’t have time to race in 2007. 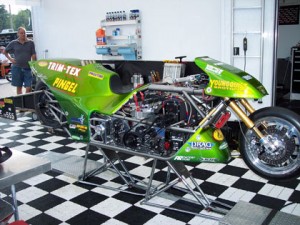 “We are really going to miss him this year,” Brantley’s bike builder and mentor Larry “Spiderman” McBride said.  “He matured into a pro caliber rider much more quickly than we thought possible.  The competition he provided me with was something the fans really enjoyed.”

As for now Brantley hopes to return to motorcycle drag racing in years to come.

“I don’t think we’ve seen the last of him,” McBride said.  “He’s a true competitor and he’ll be back.  Whenever he’s ready we’ll build him another bike.”

McBride is also hopeful the rapid machine will be purchased by someone who will continue to run the bike in the AMA/Prostar series.

“As of now the majority of the interest has been from racers in England,” McBride said.  “I’d love to see this bike stay in the states.  We need it in this class.