Dragbike Wheel Shatters off the Line

As motorcycles are pushed to their utter limits to achieve the lowest possible elapsed-time and highest possible mph, breakage can occur. It occurs quite often actually. 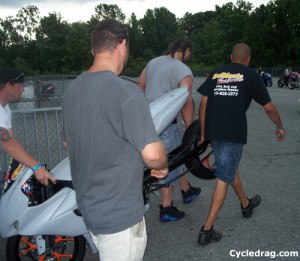 Dragbike racing can be a war of attrition.

But very rarely will a rider break something as solid as a wheel. Notorious grudge racer, Shaun “J.”, of Virginia, experienced this rare occurrence at the MIROCK Fast By Gast Summer Showdown at Maryland International Raceway in 2013. 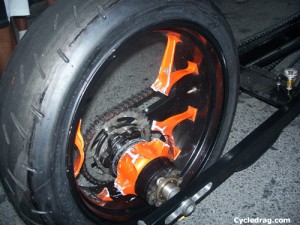 “I’ve never seen that happen before,” said Shaun, who has been racing dragbikes for over 15 years.

Just as Shaun was launching hard off the line, his mag wheel snapped right at the hub.

“It was scary. I made quite a few passes this weekend and everything was ok. It just gave way. Maybe it was a defective rim, I don’t know,” Shaun said.

Veteran racer Boo Brown, who has experienced one broken wheel in 21 years of racing, offered his theory. 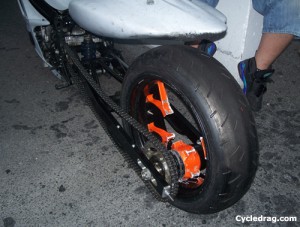 “A broken wheel comes from what’s inside the hub. There are bushings inside the hub that protect the metal on metal,” Brown said. “When the bushings wear out it allows the sprocket to move. The wheel will then continue to chatter until something finally breaks. Either the wheel or the hub will eventually give out.” 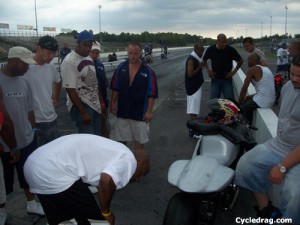 Shaun J realizes just how fortunate he was that the broken wheel gave out when it did.

“I’m really lucky that this didn’t happen at the top end,” Shaun said. “At 170 mph-plus, that could have been ugly.” 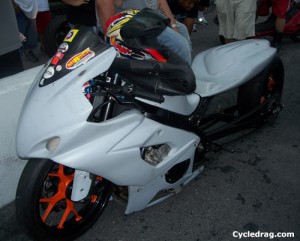 Don’t forget Shaun comes from the trash-talking, braggadocios world of high stakes grudge racing. With that in mind, Shaun offered a more predictable explanation of what happened.