Steve Johnson will reach an impressive accomplishment at this weekend’s 20th annual Fallen Patriots NHRA Route 66 Nationals presented by K&N at Route 66 Raceway, as the Pro Stock Motorcycle veteran will compete at his 400th NHRA event.

The standout would like nothing better to commemorate that achievement in his NHRA Mello Yello Drag Racing Series career than with his seventh career win on his Slick 50 Suzuki. But Johnson is also aware of the type of mindset it takes to reach the point where he can celebrate 400 races.

“When you accomplish something like 400 races, that’s representing a brand and that brand is a never give up attitude,” said Johnson, who is currently ninth in Pro Stock Motorcycle points. “I always wanted to be part of the fraternity and it’s been pretty awesome.  I look at the first 400 and I didn’t win a championship and think maybe the next 400 will be easier.”

Antron Brown (Top Fuel), Jack Beckman (Funny Car), Greg Anderson (Pro Stock) and Andrew Hines (Pro Stock Motorcycle) were last year’s winners of the event that will be televised on FOX Sports 1, including live final eliminations coverage starting at 3 p.m. (ET) on Sunday, July 9. It is the sixth of 16 races during the 2017 Pro Stock Motorcycle season and marks another solid campaign for Johnson, who has been thriving in the class since the late 1980s.

He’s persevered through struggles and frustrations, breaking through for his first victory in 2004, 17 years after he first started in the class. Johnson has won twice at the prestigious Chevrolet Performance U.S. Nationals (2005 and 2008) and most recently won in Gainesville in 2014. But through it all he has been extremely satisfied watching the Pro Stock Motorcycle continue to grow, remaining proud of a class that has prospered year after year.

“Seeing new people come into our class, that’s really cool,” Johnson said. “I love seeing the new people and I love our sanctioning body. When you love everything about it – the fans, the people, the racers – you definitely have a family. Being in 400 races doesn’t come easy, but if you love something enough you can succeed at it.” 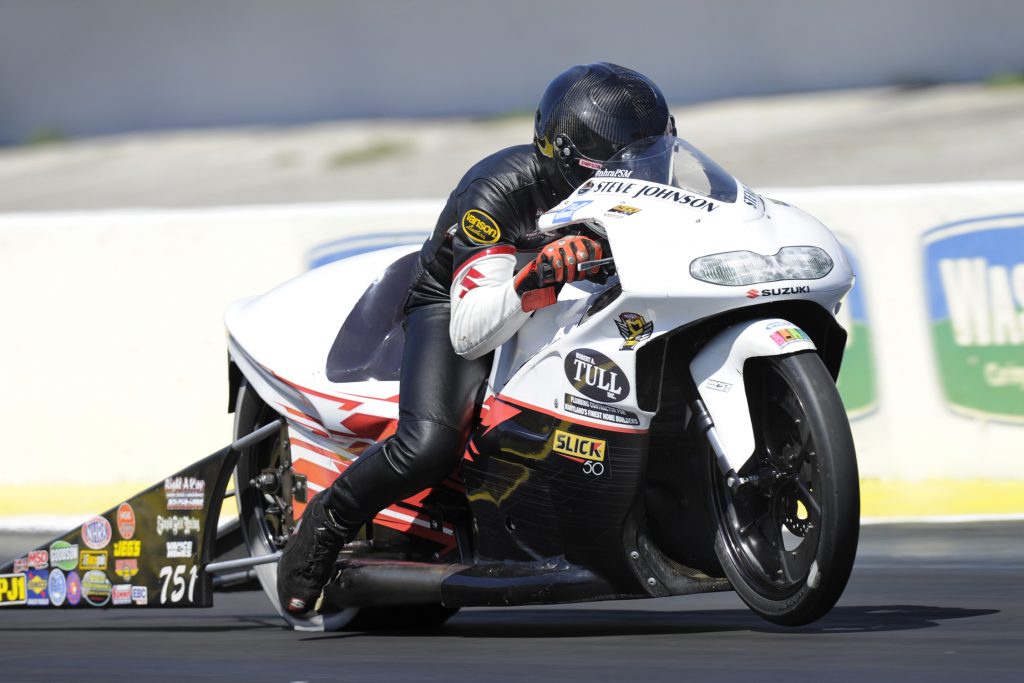 Johnson’s passion for success and race wins hasn’t waned a bit, either. He heads to Chicago with confidence that he can grab a victory against a number of talented riders, building what Johnson hopes is strong momentum heading to the Mello Yello Countdown to the Championship.

Johnson has tried a number of new things this year and is ready for it all to come together against the likes of points leader LE Tonglet, who has three wins this season, defending race winner Hines, reigning world champion Jerry Savoie, Eddie Krawiec, who won the first race of the season, Joey Gladstone, Matt Smith, Hector Arana Jr. and Scotty Pollacheck.

“I’ve been experimenting with different things and I feel like it’s going to pay off,” Johnson said. “I still want to win. I think I want to win as much as I ever did and maybe more. When I see all the data and everything add up, I know I can win. I’ve got a good engine and a good team, and we have the equipment, so we’re confident we can. I’m definitely still experimenting but I need to win some rounds. I feel if we can get to the semis, we have a chance of winning. In Chicago, you can definitely throw the kitchen sink at (the track).”

Defending Top Fuel winner Brown will look for his third win of 2017, as the back-to-back world champ will aim to track down points leader Steve Torrence, who has four victories this season.

Beckman will seek a third win in 2017 in Funny Car, but he’s chasing red-hot teammate and reigning world champion Ron Capps, who has a class-best five wins this season.

Anderson is one of three Pro Stock drivers with at least two wins this season, sitting behind points leader Bo Butner and ahead of rookie Tanner Gray. Eight different drivers have wins in 2017.

Mello Yello Drag Racing Series qualifying will feature two rounds at 5:15 and 7:45 p.m. on Friday, July 7 and the final two rounds of qualifying on Saturday, July 8, at 3:15 and 6 p.m. Final eliminations are scheduled for 12 p.m. on Sunday, July 9.

To purchase general-admission or reserved seats, call 888-629-RACE (7223) or 815-722-5500. Tickets also are available online at www.route66raceway.com. Kids 12 and under are free in general admission areas with a paid adult. For more info about the NHRA visit www.NHRA.com