Over the last 30 years my followers have known me to be into quarter-mile drag racing only.
Since the 2015 release of the most powerful production motorcycle on the planet, the Kawasaki Ninja H2, I’ve decided to take on a new challenge, which is to see what kind of speed I can reach in a mile. But not before I attack the quarter-mile so I can calculate the difference another three-quarters of a mile makes.

In early 2016 I received a Facebook inbox from an interested Texas-based customer named John Paul Faircloth  who simply said “I only want you to build my bike and I don’t care how long it takes as long as you build me the baddest H2 in the country.”

“Texas Mile Assault” project was off and running.

After months of R&D, and almost 100 dyno pulls and video documentation during every step of the build, it was finally time to test the results. First mission was to measure increase over stock which started out with a very restricted 187 rear wheel horse power.

The new Dyno results were truly outstanding at 323 rwhp which equates to 375 crankshaft hp. A “136hp” increase over stock. 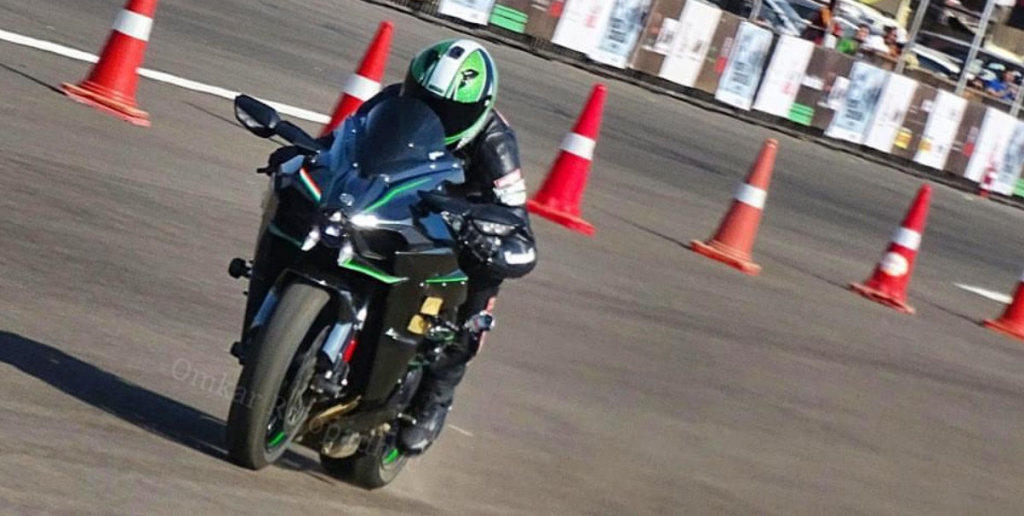 These results would make this the most powerful H2 ever recorded, and with a 8.04 etc and 184mph time slip, surely the quickest and fastest H2 in the 1/4 mile.
I have recently been successful in expanding my accomplishments in other countries by the media labeling me as the fastest man on 2 wheels in two places outside of the US.
Just weeks ago we broke our own record in India when we were the 1st motorcycle in the 9.50 zone which happened to be a borrowed Ninja H2 with an RG62 Woolich ECU flash to lift restrictions.
Just a couple days after returning from India my next trip was to Victoria Texas for the Texas Mile event in an attempt to break the 220mph barrier on a customers (now 375hp) 2015 Kawasaki Ninja H2 that I built with the promise of making it the fastest H2 in the country from all the knowledge I have acquired and the performance parts I had developed for such an extreme machine.
A week before the Texas Mile was the Texas 2k street racing event where are all of the fastest H2’s in the country would gather to prove who had the baddest combinations in the land with half of those owners running my RG 62 performance parts on them. Watching the results on social media the week before the Texas mile, it was really clear that the first fully built ninja H2  by MC cycle works had the best H2 combination as he promptly ran away from every other bike he raced.
With just 3 working days between my return from India and the TM, I had little time to prepare my customers H2 for the mile event.  Each working day was a 12-15hr candle burning work day trying to install a Woolich Log box, wide band, and  intercooler. I spent a good part of 2 days tuning the bike on my Dynojet 250i dynamometer.

When arriving at Victoria I learned that I had to make license runs so I used those 2 runs to get my tuneup perfect.
The data from the Woolich box confirmed what I had been feeling, that H2’s rear wheel was spinning thru the first 2-3 gears but on my first full pass we produced a 202 mph 1/2 mile trap speed and an unbelievable 224 mph 1 mile run against a cross tailwind.
On day 2, I woke up at 6:30ambefore the sun came up to install my stage 3 supercharger gears in anticipation of reaching closer to 230mph. But Saturday mornings forecast predicted a headwind which limited me to only 222 mph, even with more power but it also caused more tire spin.
On Sunday morning (day 3)with more favorable conditions forecasted, hopes were high. I was anxiously staged in the 12th position run order and went live on Facebook for my first run having faith we would be able to join the 225mph club on the first pass of the day and ……..24 seconds after launching the H2, my ticket read BAM… “225.3” mph but not without spinning through 1st 4 gears.
In an effort to try to stop the excessive spinning, I tried retarding the timing in lower gears and paying more attention to aerodynamics.
Kawasaki paid a lot of attention to detail when designing the aerodynamics on their supercharged Ninja, but when you disrupt their streamlining by adding a nearly 6ft tall 170 pound rider with broad shoulders, the aerodynamic flow is completely out the window.
Because I can’t get completely behind the windscreen, the wind hits my helmet, my shoulders and my hands and it’s like applying the front brake at speeds in excess of 200 mph.
Just like everybody else I was under the misconception that I didn’t need to install my H2R wings because I had an extended Adams arm and the wings would not help unless the bike was short.
The aerospace department’s purpose for the aesthetically beautiful wings wasn’t just to create big downforce on the front end to stop the wheel from coming up off the ground, but the other thing I learned from the Aerospace engineers at Kawasaki while in Japan is that the dual purpose for the wings were to create big time AERODYNAMICS around the rider.
At this point I couldn’t decide whether the wings would create even greater wheel spin because of the increased downforce on the front end  but I installed them anyway thinking that the aerodynamics would counteract the spinning and help gain a couple more mph.

With one last chance and the wind switching directions there were some concerns because several riders had to abort runs halfway through the course due to the abrupt Cross/tail wind that started pushing them off course.

When I approach the starting line the wind had turned in my favor but I was ready to abort my run if things didn’t feel well.
When I received the go ahead from the starter, I slowly rolled the throttle through first….second and third gear finally locking the throttle by fourth gear with the Michelin EVO tire hooking up in 4th. It wasn’t until the top of 6th gear that I realized that I was turning 200 more RPMs going through the traps from previous passes and I knew it was going to be a good run. The wings did the trick as it redirected the air over me and produced the fastest trap speed ever in a standing mile for a Kawasaki H2/H2R.
When I pulled up to the ticket booth the man looked at me and shook his head and gave me 3 copies of record breaking tickets that read 205 mph at 1/2 mile and unbelievably 229.1 at the mile.
It was cool to see all of the fans were staring at me giving me thumbs up as I returned to my trailer to celebrate with my crew.
This was the day I had longed for since 2015 when I first started this project.
Mods are
RG62 Performance Plus Supercharger kit
Cylinder head porting
Custom made camshafts
Woolich Racing
Michelin EVO
All parts available thru Rickey-Gadson.com
Special thanks to
John Paul Faircloth(owner),Pierre Labuschagne, Eric Conner, Gary and Barry Purnell (crew), my wife Kiana and finally Coby Adams.

MTC Summer Nationals, May 18-21, Shaping Up To Be One of The Biggest IDBL Races Ever