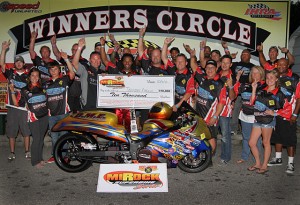 Dimey Eddinger’s DME Racing team came to Maryland International Raceway fully intending to win Orient Express Pro Street’s biggest payout ever—the $10,000 to win Battle Royale—but so did everyone else in that class of the Mickey Thompson MIRock Superbike Series. The Battle was part of October 4-6’s Fast by Gast Fall Nationals, usually a record-setting bonanza of cool fall weather. But this year Mother Nature through Pro Street tuners a curve ball of unexpected heat, and many responded with alarming success. 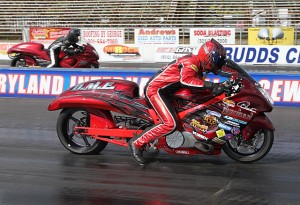 Less than two months previously, in the winners circle of the NHDRO/Manufacturers Cup Pingel Thundernationals, DME rider and Indy race winner Joey Gladstone made this prediction: “I have a feeling it’s gonna be 2 to 3 bikes in the 6s in qualifying, a .28 bump spot, and a 6.93 low ET.” 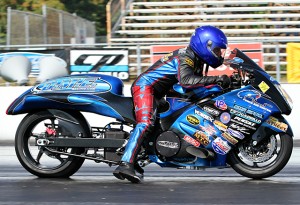 And nobody’s tougher than Pro Street competitors. Both predictions were way conservative compared to what actually happened in Battle Royale qualifying. Gladstone qualified number 1 on the turbocharged DME Suzuki Hayabusa with a 6.986 at a whopping 215 mph, .001 quicker than second place Jeremy Teasley. Tony Ficher and his supercharged ‘Busa were third with a 6.997, and DME’s Terence Angela fourth with a 7.001. DME’s Jason Dunigan qualified 8th with a 7.084—his first ever 7.0 pass. Chris Moore’s 7.202 placed him 16th and last in the A field.

Dunigan went out in the first round of eliminations, but the semis boiled down to the top four qualifiers. Ficher’s 6.95 beat Teasley and Angela took out teammate Gladstone—an unfortunate pairing for the team—7.002 to 7.017. So after all was said and done, the final of the biggest Pro Street race ever would be settled between two riders—Ficher and DME’s Angela—who’d only very recently entered the class and neither whom had ever won. NO ONE predicted two Pro Street neophytes would reach the final and battle for the big check, but that’s exactly what happened. 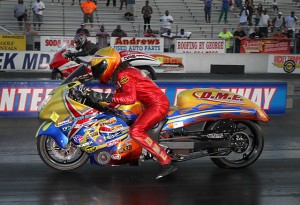 It was a pretty sizable performance advantage that Ficher seemed to be bringing to the final, making it that more surprising when Angela posted his own 6.95 to take the win over Ficher’s 6.98—the first ever side-by-side 6 second Pro Street race. “It’s amazing!” said Angela. “To go the final, run my first 6, get my first win, and all the cash—I don’t know what to say. It’s just amazing.”

“Terence stayed in the 7.0s from testing all the way through the 6.90s on raceday,” said DME team boss Dimey Eddinger. “He kept his head straight and I couldn’t ask for anything better. And Andy and Skip (Gladstone, Joey’s dad) made a tuning change that made a big difference in the final.

“To have won three straight Pro Street races with three different riders (Gladstone at Indy NHDRO/ManCup, Dunigan at Atco MIRock, and Angela’s Battle Royale win), I really couldn’t ask for a better performance from my team than what we have going on right now.”