A very talented racer appears to be on his way to joining the exclusive club.

Vantine made several short runs and one full eighth-mile pass. The highlight of his day was a stellar 1.00 60 foot time. 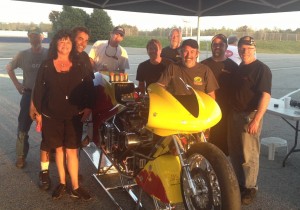 “I think he has what it takes,” 11-time champion McBride said. “His burnouts were great. His 60 and 330 passes looked strong. He was very comfortable on the bike. A 1.00 60 foot time on your first day is downright amazing.”

The machine’s best run came with Geoff Pollard at the controls a few years ago, 5.93 at 241, putting the impressive piece solidly inside the world’s top ten quickest dragbikes.

Vantine hopes to race the bike at the Manufacturers Cup at VMP, June 21-23, but nothing is confirmed as of yet.

Videos From The Dragbike Nationals at South Georgia Motorsports Park in Valdosta, Ga.