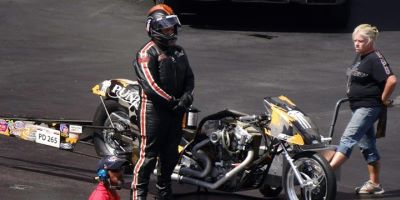 Dale Nilles finished the weekend with a win and the championship for the Manufactures Cup Series. Dale won 2 of the events summer and fall and runner up in the spring event, giving dale 304 points to win this year’s championship.

In the American Motorcycle Racing Association, Dale competed in 6 of the 7 events this season. Two events were rained out, winning 3 events, Mason Dixon, summer Bowling Green, and Zenia. Reaching the quarter finals in Baton Rouge.

Dale competed at Sturgis in the WMDRA Race at the Rally, winning the event and the Championship for the 2013 season.

For the 2014 season Punisher Racing is planning to attend 10 of the NHRA events, 6 of the AMRA events and 3 of the Manufactures Cup Events.

Our goal is to continue to compete in the Pro Fuel Harley class while seeking the opportunity to run amongst the Nitro Funny Bike and Top Fuel ranks.

We are currently seeking sponsors for the 2014 season to help offset the fuel cost of this travel.

Punisher Racing would like to thank the following for their ongoing support: