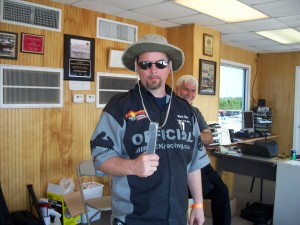 Was there foul play at The Cup?  Official tech director Phil Davis found a lead bar in the vicinity of the top-end scales during the Manufacturers Cup at South Georgia Motorsports Park, April 8-10.

Some competitors are required to compete above a certain weight depending on the class they race. In Pro Comp there are different weight requirements for various wheelbase and power-adder combinations .  A weigh-in is usually conducted immediately following each pass.

To avoid any discrepancies, Davis enforces strict rules after each run.  For example, a competitor must report directly to the scales without making contact with any crew member. However, sometimes it’s impossible for the tech director to monitor everyone.  In some instances racers have been caught chugging water or stuffing tools in their helmet to ensure they meet the minimum weight.

After a Pro Session at The Cup, Davis found a mysterious lead bar, believed to weigh as much as 15 pounds, close to the scales. Davis is fairly certain the bar was not used.  Davis believes he knows which race team planned to use the bar, but nothing can be proven.

Davis plans to keep an even closer eye on the weigh-in process throughout the season.