After starting on a high winning Round One of the Australian Top Fuel Motorcycle Championship earlier this year, Multiple Australian Champion and current National Record holder Chris Matheson has come back to Earth with a thud. Matheson said “we basically didn’t score any points in the double header at Round 2 & 3 in Perth, with the issues we had”.
First Qualifier we had a fuel shut off, fail on the pass, causing the motor to run at about 50% RPM, not good! Due to the engine driving, it over heated the clutch, setting fire to the wiring loom and main airline harness under the Bike. That in turn caused numerous other kick on problems, which forced us out for the two day, two round meeting.
Mathematically, it’s difficult now to run for the number one plate in the Championship, but we will certainly be trying to claw back some points from the two front runners Drew and Porter respectively. 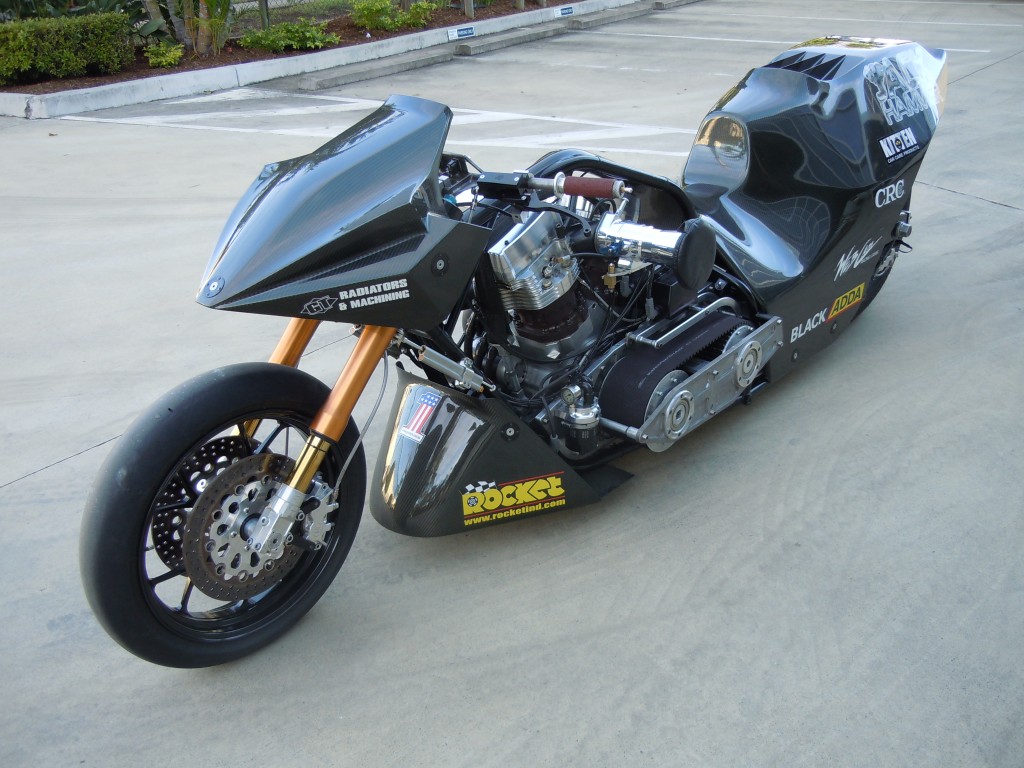 We were scheduled to run the Santos Super 3 Extreme meeting at Willowbank over the Easter weekend as an exhibition, however, it was rained out. Instead, we totally re-wired and aired the Bike, in readiness for the upcoming Nitro Champs in May.
Everything has to be right, if you are serious about running at the top level. We still have two rounds remaining over the next couple of months and anything can happen when you’re racing these Nitro Bikes.

Unfortunately, we have only had six passes on the bike since debuting the Bike late in 2014. We are on top of the clutch and tune up, we just have to get the laps under our belts and go rounds.
Our short times are as quick as the Bike has ever gone, not forgetting the Bike was a multiple Championship winning machine in the USA and held the Nitro Harley World ET Record up until recently at 6.220 at over 230 MPH.
The short times of 1.1 seconds, 60ft are good for the V-Twins, as they take a bit to get going off the line, due to the low engine revs, normally around 2500 RPM. Once they get going they really stretch their legs in the back half of the track.
Sydney Dragway has been a great Track for us in the past, we have had many wins there, including three Nitro Champs, three Australian Nationals and re-set our own Track Record on our Multi Cylinder Bike on a number of occasions. We aim to win and collect more points to better our position from our current third place in the Australian Championship.
Matheson said “the Jack Hammer Crew are really keen to make amends for the poor result at Perth and are looking forward to seeing the fans in Sydney.”
The Nitro Champs will be held at Sydney Dragway over the weekend of Saturday 2nd & Sunday 3rd May 2015.