Chris Matheson Back in The Saddle after Top Fuel Motorcycle Crash 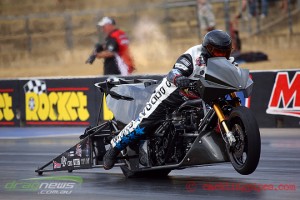 Three time Australian Top Fuel Motorcycle Champion returned to the scene of one of the more spectacular high speed crashes in history earlier this month to compete in the Australian Nationals. Matheson had been recovering since his 231 MPH “off” where he was blown off his Nitro Fuel bike after hitting a bump whilst going for the rear break. Matheson said, “returning to the track was great, the last time I was here I arrived in my Kenworth Transporter then left in a Ambulance and the remains of my bike on the back of a tilt tray.  We have a new machine which we have   upgraded the previous combination to help us chase down our goals. 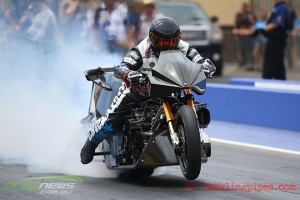 The Nationals was a good hit out for the new bike and the old beaten up rider. My Team have been working their magic in the workshop and this was a test run for us.

The guys were brilliant as always ,the bike is excellent ,we just need to fine tune it to get fully back into the groove.

We struggled with the track temps on the weekend chasing traction as we tried  to calm down the 1500 BHP engine. 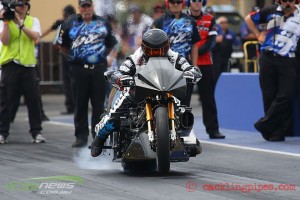 I had a close call in qualifying when I got out of the groove and crossed into Chris Porters lane who is the newly crowned Australian Champion taking the number 1 plate off me. Chris was gracious down the deep end when I arrived ,we had a little chuckle but it could have been ugly if we came together.

We top qualified but really did not get a full powered pass in all weekend as we slipped around chasing traction.

Come race day ,we got to the semi but shut down on the line with low oil pressure which ended up being a sticky relief valve in the pump so game over. 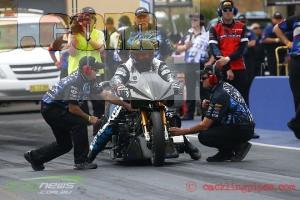 Porter and Graeme Morell raced the final with Porter taking the win and the Championship with Morell second in the points  .The new season kicks off in Perth in January then zig zags to all points of Australia finishing up in December 2014 in Victoria. We are ready to take up from where we left off earlier this year trying to better our 241.8 MPH at 6.04 ET. We will need to get up to speed quickly as there are plenty of challengers talking up their prospects of taking our records .Bring on 2014.” 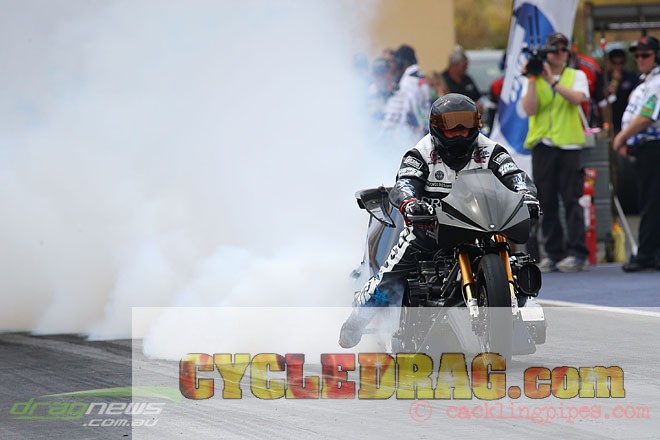