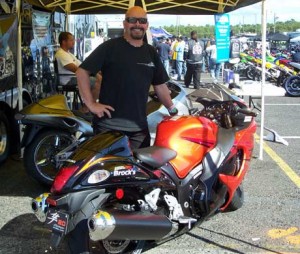 It has never been more evident that the major motorcycle manufactures are paying close attention to what’s going at the drag strip.

Suzuki, creator the 1340 c.c. Hayabusa, and Kawasaki, creator of the 1352 c.c.ZX-14 have become engaged in an epic battle for straight-line supremacy.

In 1999 Suzuki took the two-wheel performance industry by storm by releasing the Hayabusa and overtaking the Honda CBR 1100XX Super Blackbird as the world’s fastest production sport bike. The Hayabusa quickly became the late-model motorcycle of choice among drag racers and seemed to antiquate anything previously produced. 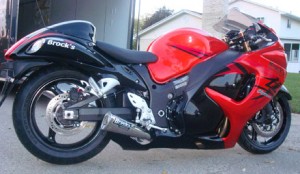 The Hayabusa remained largely unchallenged until 2006 when Kawasaki upgraded its legendary Ninja ZX-12 to a beefier ZX-14.  After review many critics favored the ZX-14 over the Hayabusa.

Welcome to 2008.  Suzuki responded to its competitor by heavily revising and upgrading the Hayabusa. Along with several other improvements the displacement was increased by 40 c.c.s and the compression ratio was increased from 11:1 to 12.5:1.

“It’s unbelievably fast.  There’s no comparison between the old Busa and the new Busa. They look like the same bike, they act like the same bike but the new Hayabusa does everything better. It makes more power everywhere,” Davidson said.

After getting the machine to ring-up 177 horsepower at the rear wheel on regular high-octane pump gas, Davidson set out to see how quick he could make the new Hayabusa go at the drag strip.

“The numbers on the dyno were very encouraging, especially on pump gas through the stock exhaust,” Davidson said.  “That’s unheard of.”

Davidson’s team then performed minor modifications to the bike by adding a front end lowering kit and three positioned dog-bone lowering links to the rear to get the bike as low as possible. A Brock’s Performance Ultra Lite Clutch Mod was also added to smooth out the machine’s power.

“The back torque limiter in the new Busa is the same as the old Busa,” Davidson said. “It makes smooth actuation very difficult for drag racing.”

After just a few runs Gadson recorded an impressive 9.32 at 150 mph. So just how much better does this make the new Busa than the original version in released 1999?

So in less than a decade the Hayabusa has improved by nearly a full half-second of performance.

“It’s all in the engineering from the factory,” Davidson said. “The engine has 16 titanium valves, larger intake cams, larger exhaust cams, and it’s got a two-millimeter additional stroke which gives it more torque.  It makes the thing easy to ride. It has so much low end power it gets the bike moving for big riders.”

At this rate we are on-pace to see stock motorcycles running in the eights within the next few years.

“My prediction is with a Brock’s exhaust on the bike, the fuel injection mapped out, and a little tweak here and there, I expect the 2008 Hayabusa to make between 200 and 205 horsepower at the rear wheel. I expect it to run in the 8.80s at nearly 160 mph. That’s pretty amazing for a stock motorcycle with a few bolt-ons.”

Davidson came very close to making his bold 8.80 predictions become reality just a little over a month after the Atco trip.  Davidson added one of his exhaust systems, a Power Commander, and a few other aftermarket pieces to the machine and Gadson became the first rider to break the 2008 Hayabusa into the eight-second zone with a stellar 8.991 at 155 mph in Gainesville, Fla. in early November. 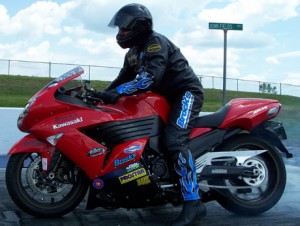 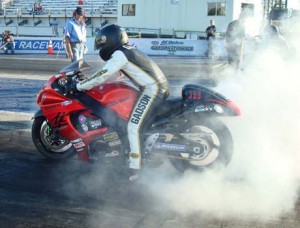 At the same event where Gadson went 8.99 on the new Hayabusa, NHRA Pro Stock rider Chip Ellis fell just two-hundredths of a second behind, recording a 9.01 on Davidson’s 06 Kawasaki ZX-14 with nearly the same modifications that Gadson had on the 08 Busa.  Later that evening as conditions improved, Ellis rode the 08 Hayabusa, dubbed “Chronic,” to an unprecedented run of 8.91 at 156 mph.

On top of the the slight edge in performance Davidson admits that he’s had two years to develop and refine the ZX-14, whereas he’s still learning the new Hayabusa.

“After two years worth of experience on the 06 ZX-14, if that thing can go any faster with stock bolt on parts, I sure don’t know how,” Davidson said. “The new Busa we are still learning and we will get it to go quicker. They are both very quick bikes but The 08 Hayabusa definitely has a slight edge over the 06 and 07 ZX-14.”

So the clear-cut winner is the Hayabusa, right? Hold the phone.

Kawasaki was well-aware the new Hayabusa would be a serious threat and announced in late 2007 that the 2008 Kawasaki would be upgraded as well.

Kawasaki didn’t revamp it’s machine nearly as much as Suzuki did, but they probably didn’t need to.  Remember the ZX-14 is only entering its third year of development and perhaps only needed minor refinement, compared to the Hayabusa which hadn’t been dramatically changed since its inception in 1999.

“Basically the new ZX-14 is the same bike with some fine tuning,” Davidson said.  “They have updated several components to fix some of the small problems they had. It’s a very comfortable bike and it has awesome brakes. My gut feeling is the 08 ZX-14 might make a tad more horsepower on the dyno than the Busa.”

The end result of this factory war is two very quick production sportbikes that are now even more so equally matched.

“We’re living the good ol’ days,” Davidson said.  “As the factories go at it, we benefit as people who like fast motorcycles. It’s an exciting time.”

So here’s the million dollar question – Which one is the all-around suprierior machine, the 2008 Suzuki Hayabusa or the 2008 Kawasaki ZX-14?  Davidson says at this point its too close to call.

“I Thought I had it all figured out, but it’s just too close,” Davidson said. “Here’s the bottom-line, if one bike is racing the other and the riders are similar, whoever makes a mistake is going to get beat.”

Adding to the parity is the fact the machines are nearly identical in cost, both with price tags just under $12,000.

Perhaps the only clear-cut winner at this point is the consumer.

And the war rages on.