Pascal Debarry Greene was born October 11, 1974 to proud parents Pascal Quarterman and Alice Luvenia Greene Quarterman in Savannah, Ga.  On Friday, June 8, 2012 God called him home after sustaining injuries from an automobile accident on I-95 near Midway, but not before his work was done. Barry was a member of the Mt. Zion Outreach Center in Midway, Ga., and owner of Greene’s Home Building and Construction Enterprises.

He is known to many for his love of family, racing, and laughter. According to cycledrag.com, “Greene will best be remembered for stellar performances on a Dan Wagner-tuned Outlaw Pro Street Bike known as ‘The Black Widow’ from 2003-05. Greene’s most successful season of MIROCK racing came in 2003 when he finished second in points to his good friend Joe “Fast” Long. In 2004, Greene’s run of 7.13 at 198 mph was the quickest Outlaw pass ever. Greene also found success in the Pro Mod ranks and quickly became a major contender in the AMA/Prostar series.” 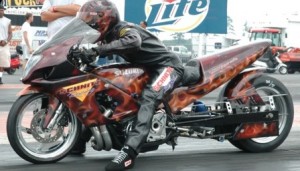 To meet him at the gates of Heaven are his grandparents: Charles, Sr. and Dorothy Quarterman; and uncles John Howard, Earl, and Thomas Quarterman.

Dorchester Funeral Home of Midway has charge of arrangements.
Directions

From Hwy 84  East, turn left on Airport Rd, ,From 84 West turn right on Airport Rd, Right at the light on EG Miles Parkway, Left on Live Oak Church Rd, the Church will be on the left