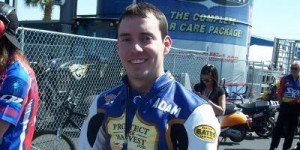 MavTV/ProtectTheHarvest.com rider Adam Arana vows to get better after falling in the first round of the Auto-Plus NHRA Nationals on Sunday at Maple Grove Raceway.

Arana, the lone rookie in any of the four professional classes in the Countdown to the Championship, went red against defending Pro Stock Motorcycle champion Eddie Krawiec at Maple Grove, but Arana admitted he’s still learning in his first NHRA season.

“There are definitely a lot of tricks to the trade,” Arana said. “This is drag racing, and it only lasts for a quarter-mile and less than seven seconds. If you’re not good on the (Christmas) Tree, you’re not going to win. You could have the baddest bike out there, you could be the best rider, but if you aren’t any good on the Tree, you’re going to lose.

“I need to step up my game on that and practice more. That’s what I’m going to do when I get home from here because I’m tired of losing. Losing sucks.”

Arana left .040-second too soon to give the race to Krawiec, but he said he didn’t feel like he was early.

“It didn’t really feel like I was anticipating it like I had in the past,” Arana said. “I saw it, and as soon as I saw it I went for it.”

Arana pulled the clutch in before completing his run, upset with himself.

“I was mad,” Arana said. “I hate losing, and I hate to not even give someone a race because I gave up the win right away. I’m pretty frustrated.

“I chose to go in the left lane because I was a little afraid of going in the right lane. I had red-lighted twice in qualifying, and that was on my mind. I just messed up.”

Arana said he will continue to work in his reaction times before the next race, the NHRA Toyota Nationals on Oct. 25-27 at The Strip at Las Vegas Motor Speedway.

“I need to do something to become mentally stronger and not worry about that stuff because if it’s on your mind, one of two things is going to happen: Either you’re going to go red or you’re going to sleep,” Arana said. “That was also on my mind. I was like, ‘I can’t be afraid to go red, so I can’t sleep. I’ll try to kill the Tree.’”