For rider Joey Gladstone, that makes eight Pro Street championships—four in a row each at the International Drag Bike League (IDBL and former MIRock Series) and the Manufacturers Cup. Real Street championships at both sanctions are the first in the class for both Gladstone and DME.

“It was another great year for the DME Pro Street bike,” said Gladstone. “Everybody’s getting a lot faster these days and the team gave me a great bike all year. We were able to compete with the rising level of competition.”

“I had a great year of racing,” said Dunigan. “I’m really looking forward to racing with the DME guys next year.”

“Another extremely great racing year,” agreed Angela, who now heads off for another winter of deep sea welding. “Once more I got the privilege to form part of an awesome team, to share racing knowledge with great people, to compete against great racing peers, as well as interacting with awesome racing fans. It was a learning experience this year for sure!”

“I really never expected all the support I got from the DME team,” noted first year Pro Street racer Connelly. “I thought I was gonna be on my own, but I had every one of those guys behind me every single time. I know that next year that I’ll have the same thing, so I know I’ll be able to get better and better, faster and faster.”

DME sponsored racer Dustin Lee laid waste to sportsman classes all over the nation in 2016, earning him Dragbike.com’s coveted BAMF award for the second straight year. “Being part of team DME is probably the greatest thing that’s happened to me,” said Lee, who collected IDBL Crazy 8s and Pro ET championships along with NHDRO’s Streetfighter title. “I have became part of a great family and hope for many more years and winlights with them.”

“I’d really like to thank all of our riders for another great year,” said Eddinger, who added “and I expect we’ll do more of the same in 2017.”

“It’s gonna be even tougher next year, but I really think we’re ready for the challenge,” agreed Gladstone. “I’ve really gotta thank Andy and Dimey for letting me continue to ride the bike and allowing me to represent their company.

“I’m also really proud of our first Real Street championship. As an all-motor bike, it’s an oddball combination and that makes it fun.”

With two Pro Street bikes sitting under the Connelly tent and only Chris Jr. riding this past year, DME and the Connelly’s have made plans to add a world class, championship winning rider to that portion of their already impressive team. “I think everybody in Pro Street will be really surprised with what we have going on next year,” finished Eddinger. “I can’t talk about who the new rider is just yet, but we expect he and our team will learn a lot from each other in 2017.”

Now DME moves on to roaming the aisles of the Performance Racing Industry show to solidify supplier partnerships, and the task of winter builds back at the shop in Winston-Salem. Eddinger, Sawyer and everyone at DME wish everyone a great holiday season and look forward to making sure everyone has the finest possible racing components and builds for 2017. 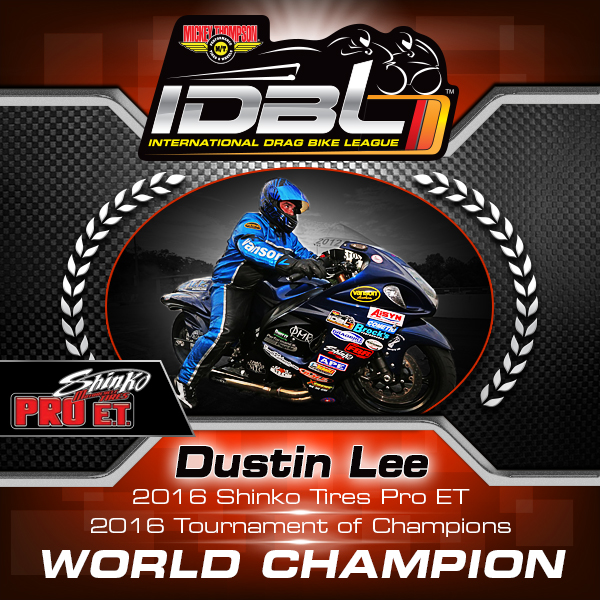 Jerry Savoie Proves You Can Have Strength Without Numbers

NHDRO Champ, Top of the G.O.A.T List— Paquette Looks Back on Successful ‘16