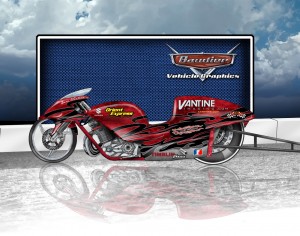 Veteran Pro Mod racer David Vantine ended the 2010 racing season with a runner-up finish the first time out on his brand new Suzuki. Going to the final the first time out on a new bike is rare enough, but making that achievement even more impressive was the size and quality of the Manufacturers Cup Pro Comp field that Vantine had to fight through to get there.

Vantine will race again at the next Manufacturers Cup event April 8-10, 2011 at South Georgia Motorsports Park and the American Drag Racing League event at West Palm Beach, Florida, the following weekend. “My plan then is to make all the rest of the ADRL races and sprinkle in some MIRock races when time allows,” said Vantine, President of Vantine Imaging in Hamilton, New York.