Newport News, Virginia is like many small American cities. Fairly quiet, unassuming, full of hardworking people trying to get by. We’re known for the Newport News Shipyard as well as being home to many military families. There isn’t much past ordinary. Nothing to make us stand out from the crowd. But what you may not know is that, in the heart of this typical city, lies the headquarters of one of the world’s fastest men. A man who has broken more records than bones. A man who, even in his fame, is more down to earth than most. This man is world champion drag racer, Larry McBride.

In that video Larry breaks 6.00s for the first time in history. Shockingly, even that is not his fastest time. Larrys current record is 5.79s @ 245 mph. Thankfully “Spiderman” made some time to sit down with us recently. We met him at his machine shop, Cycle Specialist, in Newport News. Here’s what the man himself had to say…

Thanks for meeting with us Larry. Let’s start off with where you’re from and how you got here.

Well I was born and raised in Dothan, Alabama. My father was in the service and was stationed at Fort Eustis. We actually came up here to Virginia in 1974 and I’ve been here ever since. I started working at Casey Cycle City in 1974. Started motocross racin’ in ’74 and drag racing in 1977 and went pro in ’78. In ’77 I started racin’ for a local guy named Squeaky Bell, then from there started racing for Danny Johnson outta North Carolina in 1980. I started doing my own deal in 1985 when I finally owned everything.

What did you enjoy more about drag racing that lead you to leave motocross? 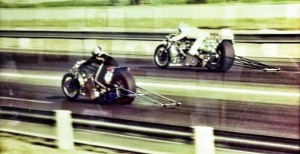 The motocross was fine, I continued to play with dirt bikes on and on even after drag racin’. I was just into the motors and building the engines, making things as fast as they possibly can from point A to point B. Some people just get interested in, and in love with circle track racing. I love all racing personally, but the one that set my tone, the one that I wanted to ride, was drag racing. I’m glad I did now, ’cause I’m going on 34 years of drag racing. You sure can’t race dirt bikes for 34 years! I’ve had a lot of fun. Met a lot of good people.

In those 34 years how many world championships have you won?

Well I am a 10 time world champion. We say world, but it’s really U.S. champion. We are also in the 2010 Guinness World Records, so that’s also quite a big accomplishment for us. 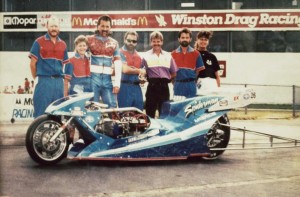 Which championship meant the most to you? The first? The tenth?

Well, I won the first one in 1991 which put me going into ’92 as the champion and I crashed March the first 1992 on the very first race of the season. Right after winning the championship. It took a little bit to recover from that. I came off the bike at 205 mph. I now know that it happened because of a lack of respect for the motorcycle. You know, I was young. When you’re young you’re cock-strong! You’re invincible! And that was the problem. I didn’t have the respect of the motorcycle that I should have had. It showed me, this thing will kill you. So I think once I learned that respect, the second championship meant more to me. The first one was a lot of fun, made a lot of money, partied, it was great! But we lost perspective. At the time of the crash we were testing some new tires and things. At the time I had this saying, “Y’all get the motorcycle, I’ll put it down the track.” Well now, I don’t say that anymore. What a bad saying. It definitely got me. Really learned you gotta have respect on that first one. 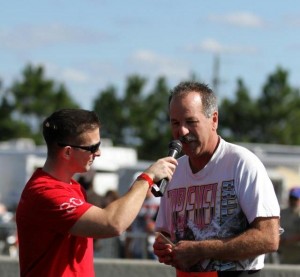 What goes through your head when you hit 250 mph? What does that feel like?

At that point, you’re part of the motorcycle. You want to go as quick and as fast as you possibly can. But there’s no room for error. Make a mistake, it’ll kill you. You gotta think, we’re runnin’ a quarter of a mile in 5.7 seconds. You hear commercials on T.V. talking about some car that can do zero to 60 mph in 5 seconds or 6 seconds. Well I go zero to 250 mph in 5.7 seconds. It’s quite an ordeal. I mean, we’re pullin 3.5 G’s leaving the starting line and a little over one negative G stopping.

Wow. Thats gotta wear you out after a day on the track.

Well it does, but we wear the right stuff and do the right things. Being one of the older guys out there, I definitely have to hit the gym a lot!

In addition to the top fuel bikes, I understand you also have a record holding electric bike in your arsenal.

Yes, I’m involved with Lawless Industries and Orange County Choppers. Of course, you can see them (American Chopper) on the Discovery Channel and I even did a couple episodes on the show with them. With Lawless Industries, we hold the quickest and fastest quarter mile time on an all electric bike. We now hold that record at 7.17s at 187 mph. We have run as quick as 7.13s but didn’t get the record. That time actually backed up our 7.17s time. It’s been really quite interesting to do.

That’s great! Are you working on any other television shows right now?

Yes, we’ve just done our first episode with Café Racer TV. Comes on Wednesday nights (on Velocity by Discovery) and starts back up in March. We’re doin’ it with this guy named Reverend Jim outta Florida. He’s not a Reverend like you would think, he’s got some few choice words to say quite a lot! It’s a pretty cool deal. 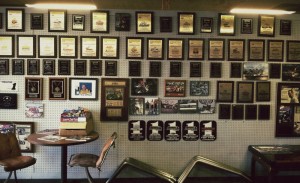 In addition to breaking world records, what do you do here at your shop, Cycle Specialists?

We are mainly a high performance machine shop. For many years I’ve been building engines for Legends cars. But a lot of that’s changed with the economy. We do build a lot of Hayabusa motors. We build a lot of drag race stuff period. We literally build drag bikes like mine for people all over the world. Australia, England, New Zealand, France… It just goes on and on. We also sell parts all over the world. That’s our main deal. We also take care of street bikes. In this economy I find myself doing things that I haven’t in twenty or thirty years. In good times, we couldn’t touch stuff like street bikes. We just didn’t have the time. But I guess I’ve always had an issue. My issue is I like helping people. It’s my biggest downfall. I can’t tell anyone no. Someone comes in and needs help with something, I do it. I am very honest and very direct with people. I really don’t beat around the bush. The worst thing anyone can ever say about me is that I’m an asshole or a prick. You can’t say I’m a liar. You can’t say I’m a thief. I may be a prick at times, but I’m not any of those other things. It’s just, I like helping people.

Story by: Mike Swede, check out  www.TheLostHighways.com for the full interview and more photos.