When Trim-Tex CEO Joe Koenig met Trent Hindman he knew right away the gifted and talented young man was destined to go far in motorsports. This season is confirming Koenig’s intuition as a pair of recent podium finishes have Hindman and his Meyer Shank Racing team leading the GTD category with just five events left in the IMSA WeatherTech Sportscar Championship.

“It’s nice to see Trent get the notoriety and get recognized as a true talent. I’m so thankful the sportscar world really knows about this young man,” Koenig said. “He always brings the car in clean. He’s aggressive and smart. It’s nice to see him climb the ladder and be appreciated as a young talent. As a friend that is all you can hope for.”

The most recent hot streak began at the end of June at the Six Hours of the Glen in Watkins Glen, N.Y. on June 30th as Hindman and team scored a decisive victory in the No. 86 AutoNation / Meyer Shank Racing (MSR) Acura NSX GT3.

“The team has been knocking at the door of a win all season really, so to finally get it done is a great feeling, especially after starting from pole position,” Hindman said. “It’s especially sweet since Mario (Farnbacher) and I had a pretty rough weekend at Detroit, and the MSR crew pretty much performed nothing short of a miracle getting our Acura NSX back together in such a short turnaround time, so we felt we absolutely needed to push hard and get the win to repay these guys for their efforts.” 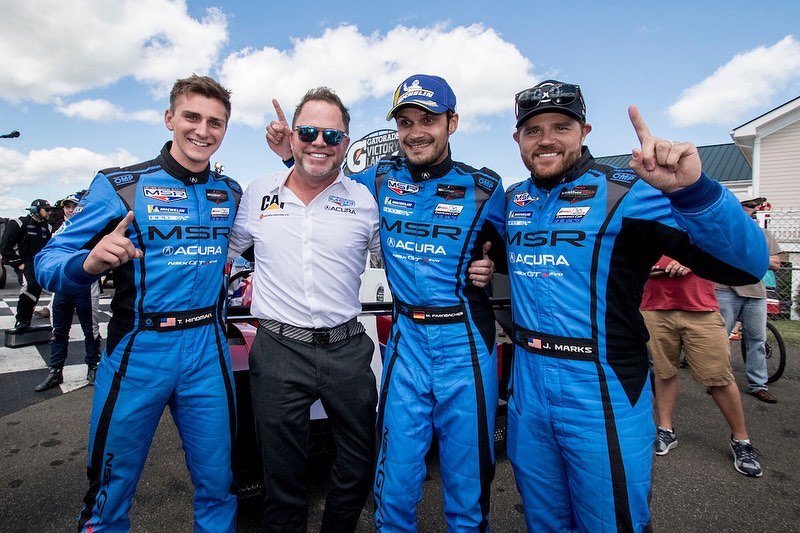 It was Hindman’s second IMSA pole position of the season. Starting up front was critical as Hindman was able to avoid some disastrous crashes to build a ten-second advantage.

“Qualifying up at the front of the field was crucial. The NSX is a fantastic car, and once you get that thing out in clean air there’s really no stopping. It’s a beast,” Hindman said. “The quality of execution of our race strategy and the work on pit lane was all down to an incredible MSR team as well as Autonation, Sirius XM, Trim-Tex, Honda HPD, and of course Acura. We brought home the pole position, the win, and extended our GTD championship lead. Just a fantastic effort by everyone.”

The team continued its hot streak with a second-place finish at the Mobil 1 Sportscar Grand prix from Bomanville, Ontario Canada the following weekend.

“It was another great effort,” Hindman said. “Five races to go.”

Next up for Hindman and team is the Northeast Gran Prix July 19-20 from Lime Rock, Conn.

Trim-Tex has been designing and producing the industry’s finest and most innovative line of vinyl drywall accessory products for over 40 years. Besides being economical, vinyl drywall accessories are more flexible and durable than metal and will not rust, kink or dent. Trim-Tex coined the phrase “Drywall Art”which accurately describes the adaptive use of materials and accessories to enhance the standard flat and squared edged world of drywall.