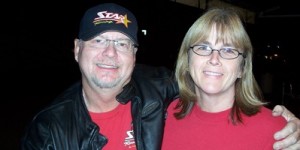 George and Jackie Bryce of Star Racing Inc. announced plans to bring a world-class motorsports racing facility to Americus. The $12 million facility is expected to attract as much as $75 million annually for the community and to create more than 200 full-time and part-time job positions over a five-year span.

The facility, to be located across from South Georgia Technical College (SGTC), is expected to include “a quarter-mile concrete drag strip, 2.5-mile road racing circuit (similar to Road Atlanta), a motorsports related technology park, a training facility for drivers education and law enforcement training, and a national motorcycle drag racing museum,” according to the press release from the Bryces.

George said that the original idea for the motorsports facility “came from right here; just me and Jackie and our friends.” George explains that he and his wife travel all over the world, including trips to Asia, Australia and Europe, for various racing events. This travel, and the expenses related, are far from ideal for the Bryces’ line of work. “$50,000 to $100,000 — that’s what Star spends every year renting race tracks for us to do our business,” George said.

It is for this reason that the idea developed to build a one-of-a-kind racing facility right here at home. The Bryces don’t want to build a facility that benefits only their business, though.

“We want to put more ‘water’ in the ‘lake’ so everyone’s boat floats,” George said.

It was this method of thinking of the community’s economic growth as a whole that has driven this idea from the beginning.

“The idea is to get 40 (motorsports-related) companies to move to Americus to put their shops on the race track … where they can test, race … their own products right in their own backyard,” George said. “There’s not one of these in the world where there’s an airport and a technical school (right next door) and 450 acres of available farmland,” George said. He adds that the low altitude of the area is also a “big draw” for racers. The mild weather conditions also offer opportunities for testing, training and competition year-round.

The planned technology park will be “the destination for participants, fabricators, suppliers in the motorsports market and other major players within the industry,” according to the release. George is hoping to receive similar responses like a letter he received from a road race car builder on the West Coast. The letter, from a company that produces 170 replica Porsche road race cars each year and ships them worldwide, stated that if the facility is completed in Americus the company will move it’s operation here to take advantage of the close proximity of the track to the business’ building facility. It is exactly this type of interest the Bryces are expecting once all the details are in place.

“I don’t want to put the cart in front of the horse,” George said. “(This) is not really an announcement of what’s coming, it’s what will happen if all the stars line up.”

The “stars” he is referring to are several key events that must happen prior to the project getting underway. The first of these “stars” aligned on Tuesday as the Sumter County Board of Commissioners voted unanimously to rezone the proposed site, 449 acres across from SGTC, from R-R (Rural Residential District) to C-3 (Commercial Recreation District).

Following this approval, one significant step remains in the initial process: the finalization of a contract with the Americus-Sumter County Payroll Development Authority (PDA) for the land acquisition.

“We’ve been working with the PDA for about nine months,” George said.

Following these two important steps, the planning process for the motorsports facility can continue. The next steps will be to develop a master site plan with engineering and architectural drawings, in addition to an artist’s rendering of the completed project that can be featured in sales brochures for the facility. The plan is to have a professional road racer design the course at the facility.

The final step in this process involves funding for the construction of the facility. George plans to take the project plans and other information to various motorsports businesses in neighboring states to elicit their participation and draw them to the new facility.

“I feel like we can get all that done within the next eight or nine months,” George said. He hopes to be able to break ground on the proposed facility before the end of 2011, if all goes according to plan.

“Eventually we will develop a private investor opportunity, but we don’t have that done yet,” George said. “We are looking for everyone in our community to be on board.”

The Bryces are asking for local support and community involvement in this project.

“Our goal for the project is to benefit Americus-Sumter County, so we want to benefit everyone who wants to get involved,” George said. “The first thing I did was approach (SGTC President) Sparky Reeves (SGTC director of Economic Development) Wally Summers (with the idea.)”

George said the two men practically “fell on the floor” in approval for the new facility and its potential for the school.

So we got great support from them from the start,” George added.

The potential for community growth from this proposed facility is not only from the new motorsports-related businesses moving to the area, but also from an enormous increase in local tourism. The events planned for the facility (ranging from local community events, national car clubs, car shows and training groups) will draw huge numbers of visitors to the Americus area that will, in turn, contribute money to the local economy through lodging and restaurants, as well as adding to the sales tax revenue of the area.

The Bryces, who opened Star Racing in Americus more than 30 years ago, said, “We want to do something for the community that has been so good to us. We love Americus and want others to love it here, too. We have three goals: 1. To bring hundreds of jobs  2. To bring millions of dollars into Americus and Sumter County  3. To lower our millage tax rate for all citizens. Through the increase of sales tax revenue to the city and county, this will lessen the need for property taxes. We believe this is the shot in the arm we need here to continue to have a great place to live and work.”