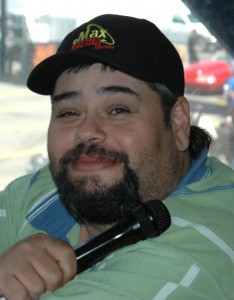 John Leviner, 46, a key player in the day-to-day operation of  Rockingham Dragway, passed away Wednesday, Nov. 16, after suffering an apparent massive heart attack at his home.

Leviner, known familiarly by the nickname “Big John,” was a jack-of-all-trades at Rockingham for 18 years, handling announcing, event management and organization responsibilities.  He is survived by his father, Johnny Leviner, his mother Brenda Sellers, several brothers and sisters, nieces and nephews.

“It’s a terrible and unexpected loss,” Rockingham owner Steve Earwood said, “both professional and personally.  Whenever I needed to know that something was going to be taken care of, no matter what it was, I turned it over to ‘Big John’ and never thought about it again.

“Besides everything else he did, ‘Big John’ kept everyone loose.  He was a free spirit who loved life and loved working at Rockingham Dragway,” Earwood said.  “He made it fun taking our sport serious.  He left a mark on all of us.  It won’t be the same without him but you could never forget him.”

Funeral arrangements will be released later.

Please be in prayer for John’s family, friends and the staff of Rockingham Dragway

I had the opportunity to meet “Big” John in 2003 when he graciously picked me up at the airport prior to a motorcycle drag race at Rockingham Dragway. In less than five minutes John had me cracking up in the passenger seat of his hot rod pickup truck.  John was the kind of guy who could make you feel like you had been friends with him for years, minutes after meeting him.  He had a geninue love for his work at the race track and was an all-around great guy.  He will be missed.