History and a chance for glory at one of the most historic tracks on the NHRA Mello Yello Drag Racing Series circuit is on the line at the 51st annual AMALIE Motor Oil NHRA Gatornationals, March 12-15 at Gainesville Raceway.

A year after celebrating its 50th event, the Gatornationals will be just as big in 2020. With the NHRA celebrating the 50th anniversary of Pro Stock during the race, honoring legends who will be in attendance. As part of the yearlong celebration, the event will feature the Hot Rod Junction.

The thrilling NHRA Prime Time will take place during the second qualifying session on Friday, ensuring the iconic race will continue to hold its place as one of the most memorable stops during the NHRA season.

The legendary track serves as the East Coast opener and it has been a must-see event for decades. With a new racing surface installed a year ago, fans will be treated to another 11,000-horsepower thrill ride. Richie Crampton (Top Fuel), Robert Hight (Funny Car), Bo Butner (Pro Stock) and Andrew Hines (Pro Stock Motorcycle) are defending winners of an event that will be televised on FOX Sports 1 (FS1), including finals coverage on Sunday, March 15 at 9:30 p.m. (ET).

Pro Stock Motorcycle makes its annual debut at the AMALIE Motor Oil NHRA Gatornationals, marking the first of 16 events in the highly-competitive two-wheeled class. Hines is the defending race winner, using that to roll to his sixth world title in impressive fashion. Hines, the winningest rider in class history, finished with eight wins in 2019, but he’ll face plenty of challenges this year, including from teammate Eddie Krawiec, a six-time Gators winner, former world champs Matt Smith, Jerry Savoie and Angelle Sampey, and Hector Arana Jr.

Doug Kalitta powered to the top spot in the Top Fuel ranks after the opening race of the 2020 season, claiming the win in Pomona to start the veteran’s year off perfectly. The longtime standout is after his first career world title, as well as his fourth victory in Gainesville, but it won’t be easy. Kalitta will try to take down the likes of back-to-back world champ Steve Torrence, who is after his first Gatornationals win, Terry McMillen, three-time world champ Antron Brown, 2017 champion Brittany Force, Leah Pruett, Shawn Langdon, Austin Prock and Clay Millican. 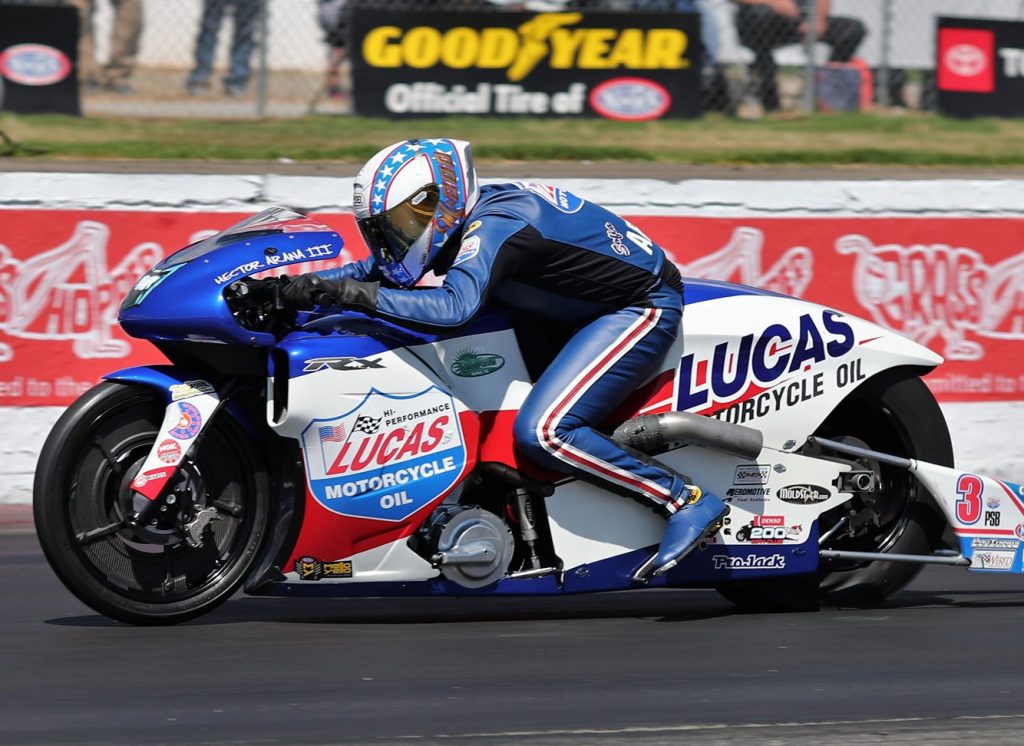 Hight used his fourth win at the legendary facility as momentum en route to his third world championship in Funny Car. He put together the most consistent year in his standout career and will try to top it in 2020 when Hight races against the top names in the loaded class. Jack Beckman won in Pomona to open 2020, while other star contenders include 16-time world champ John Force, Ron Capps, a three-time Gainesville winner, Tommy Johnson Jr., 2018 world champ J.R. Todd, Matt Hagan, Cruz Pedregon, Bob Tasca III, Alexis DeJoria and Tim Wilkerson.

Butner claimed his first Gatornationals win in Pro Stock a year ago, fueling a quick start to the 2019 season for KB Racing. It was rival Elite Motorsports who struck first in 2020, as Jeg Coughlin Jr., a five-time world champ, dominated in Pomona. Coughlin, who will retire from full-time racing following this season, will look to keep that going at the historic race against the likes of defending world champ Erica Enders, four-time race winners Greg Anderson and Jason Line, who is also retiring from full-time competition after the 2020 season, Alex Laughlin, Deric Kramer and Matt Hartford.The event is also the season-opening race for the E3 Spark Plugs NHRA Pro Mod Drag Racing Series. The race is presented by FuelTech, and the defending winner is Todd Tutterow, who knocked off reigning world champ Stevie “Fast” Jackson in the final round. The races also feature thrilling competition in the NHRA Lucas Oil Drag Racing Series, where future stars of the sport hone their skills, as well as the first race of the 2020 SAMTech.edu Factory Stock Showdown Drag Racing Series season.

For the first time, Tom Bailey and Rod Tschiggfrie will participate in an NHRA Street Car Showdown, making several passes throughout the weekend. Fans won’t want to miss the fastest street car versus the quickest street car showdown.

As always, fans can interact with their favorite drivers with an exclusive pit pass to the most powerful and sensory-filled motorsports attraction on the planet. This unique opportunity gives fans direct access to the teams, allowing them to see firsthand the highly-skilled mechanics service their hot rods between rounds, and get autographs from their favorite NHRA drivers.

NHRA fans can take part in the NHRA 101 walking tour to see the cars and teams hard at work in the pits. Fans can also attend Pro Stock School and Nitro School to learn how the cars operate and reach their thrilling speeds. Gainesville Raceway will also host a Mello Yello autograph session and allow fans to meet their favorite drivers as well as the Sealmaster Track Walk hosted by NHRA announcer Joe Castello. Another can’t-miss experience is the winner’s circle celebration on Sunday after racing concludes. New for 2020, the winner’s circle will be moved to the track surface, allowing fans a more intimate and up-close experience to help celebrate the event winners.

To purchase general-admission or reserved seats, call (800) 884-NHRA (6472) or visit www.NHRA.com/tickets. Kids 12 and under are free in general admission areas with a paid adult. For more information about the NHRA visit www.NHRA.com.