“I’m truly excited about the 10th Anniversary schedule in 2023 for the PDRA,” said Tyler Crossnoe, series director, PDRA. “Introducing familiar faces back on tour is always exciting, especially being two racing surfaces that are known for being fast and giving consistent racing all weekend long, pairing with the returning facilities from this season. Marking the 10-year anniversary of the PDRA is an important milestone, and with the schedule line-up below, we feel it could be the most competitive and exciting season yet for our racers and fans.”

The season will kick off with the traditional season opener, the East Coast Nationals, March 30-April 1, at GALOT Motorsports Park. Virginia Motorsports Park will then host its first of three races, the Mid-Atlantic Showdown on April 22-24. The series continues on to Summit Motorsports Park for the third annual American Doorslammer Challenge, May 25-27, and Maryland International Raceway for the North vs. South Shootout, June 15-17.

Midway through the season, the race-your-way-in Summit Racing Equipment ProStars will take over VMP as a part of the track’s Night of Fire on July 21-22. Drivers earn ProStars points through attendance and on-track accomplishments, with the top 8 in ProStars points in several pro, sportsman, and Jr. Dragster classes earning their way into the event.

“Summit Racing Equipment ProStars was hands down my favorite event of the year in 2022,” Crossnoe said. “The atmosphere with the live concerts and Night of Fire exhibition elements, the drama with the chip draws and random pairings, and being able to put all of our focus on the top supporters of the PDRA for a one-day entertainment event was an incredible experience for fans, racers and even our staff. Every racer that I’ve talked to has stated the importance to make ProStars and how the event rekindled the fun that is our sport. Pro Street and Super Street make their debut into the program this season, which adds another exciting element to the program. We have a few more updates and announcements coming for ProStars, but you’ll just have to wait until PRI to hear what else we have up our sleeve.” 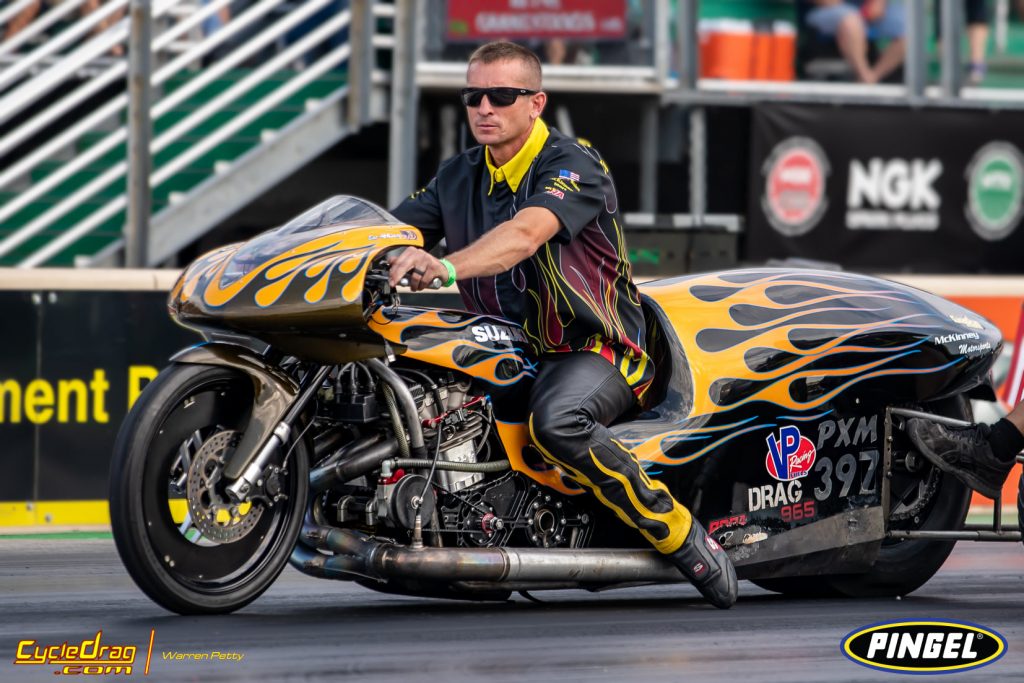 The second half of the season will begin with a return to US 131 Motorsports Park, where the series last raced in 2018. This time, the PDRA stars will join the track’s legendary US 131 Northern Nationals, which typically features modern and nostalgia nitro cars, jet cars, and much more.

“To say we’re excited is an understatement,” said Jason Peterson, Executive VP Operations/General Manager, US 131 Motorsports Park. “We kept the Northern Nationals going after IHRA stopped doing it. This is just going to be a huge addition to the event to take it back to what we think will be bigger and better than the former national events we used to have here. It’s going to add more professionalism with Pro Mod, Top Sportsman, Top Dragster, and all the other classes. It’s all professional stuff. The pits are going to look outstanding with great rigs and professional teams. It’s just going to be a great experience for our fans here at the Northern Nationals. We’re excited to team back up with Tommy and Judy [Franklin] and Tyler and looking forward to what we can do in 2023.”

Another returning track, Darlington Dragway, will host the Carolina Nationals on Sept. 14-16. The historic South Carolina facility has held PDRA events several times, most recently in 2020. The track is now owned and operated by Jeff Miles.

“Bringing PDRA back to Darlington has been on my radar since I took over the track earlier this year,” Miles said. “My daughters, Shelby, and Morgan, and I used to race PDRA, and I know how much of a family it is. I’m super excited to have them here. Darlington is known for Pro Mods. We have Pro Mod and radial teams testing here every day of the week. For the fans to know they have a full-fledged Pro Mod event coming in, along with Top Dragster and Jr. Dragster and all the other PDRA classes, it’s exciting. I’m very blessed to be here and so glad to have the PDRA back to help us in taking our next step to ‘be legendary’ as we like to say at Darlington.”

The season will wrap up with two mainstays on the PDRA tour, DragWars at GALOT on Oct. 5-7, and the Brian Olson Memorial World Finals at VMP on Oct. 19-22.

“Being consistent is an important element in motorsports, whether it is on track or off,” Crossnoe said. “After a lengthy scheduling process and going back and forth with other series promoters, venues, and companies involved, I can honestly say that I’m excited about the consistency of the dates and the beautiful and exciting venues below.

“Our goal is to open the door to the PDRA to as many teams and fans as possible,” Crossnoe added. “For racers, we’re offering up the opportunity to chase eight national event wins, a one-of-a-kind ProStars victory and the elusive world championship. Fans will get to cheer on their favorite driver or team at their closest stop on tour. I encourage you to mark these dates on your calendar for 2023 and either come back to another exciting and unpredictable PDRA event or check us out for the first time! Turning the calendar to 2023 marks 10 years of the best doorslammer drag racing on the planet and we do not plan on slowing down any time soon.”

PDRA will make additional announcements in anticipation of its 10th anniversary season during the Performance Racing Industry (PRI) Show, Dec. 8-10, in Indianapolis. 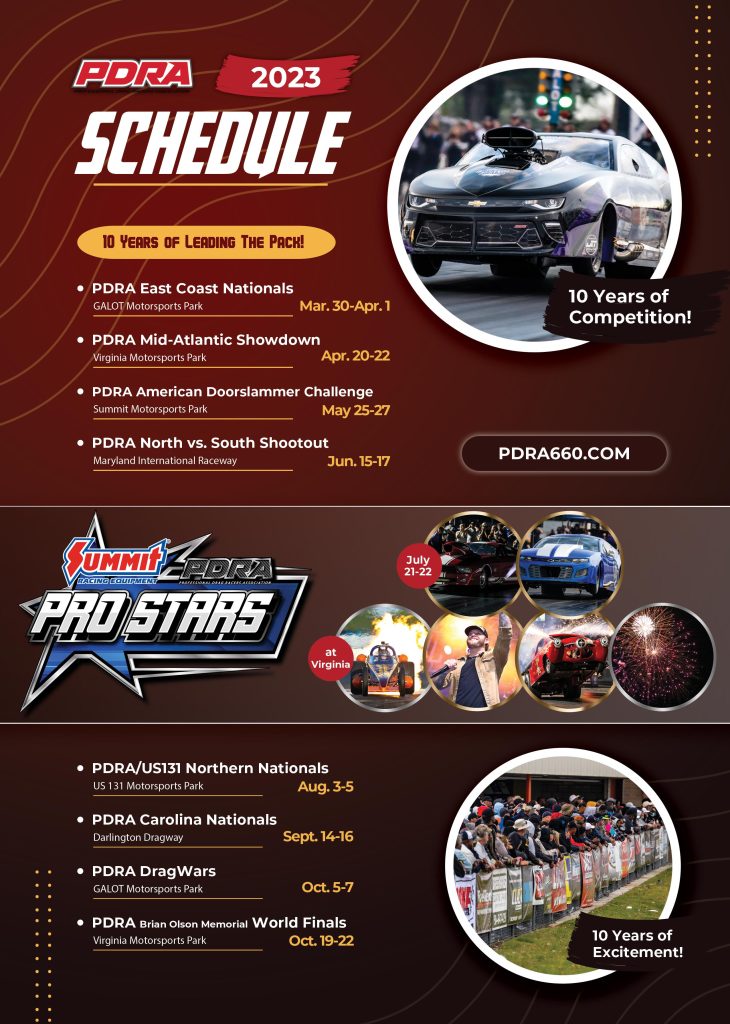