No. 14 Qualifier Savoie Ready to Take on No. 3 qualifier Stoffer 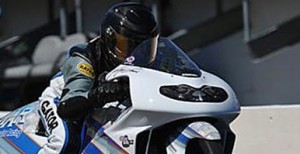 If there was a weekend to test the resolve of Jerry Savoie and his White Alligator Racing team this would be the race. Beside the extreme heat and the long hours of racing at the 57th annual Mac Tools US Nationals at Indy Savoie has been experiencing numerous problems with his new bike.

“We tested, made one pass and then the second pass blew up the engine. So then on Friday we stuck in a reliable engine that we have it does not have as much power and we got in the field. Saturday morning we worked in the shop till 1 o’clock in the morning on a really good engine, probably the best engine we ever had, and blew it up on the first run[Q2] on Saturday. Then we chose, being short on engines, to not run Q3 Saturday afternoon and wait till Sunday. This morning [SundayQ4] we had vacuum pump issues and it blew the seal out of the transmission that’s why we did not perform well. Then this afternoon it was a decent run, but it was not our best run because when I dumped the clutch the shift light hit me in the helmet. “

Savoie’s voice remained positive even including a chuckle when describing all that went wrong through out testing and qualifying then went on to say, “We had a very rough weekend. Thank god for being in the field and tomorrow we should be really good we should run some numbers. Hopefully that is what happens. Coming out with a new bike you can expect problems.”

But fans and racers a like are excited to see Savoies new bike with the Suzuki Hayabusa body work. “Everybody loves the bike, I mean GT Tonglet’s tongue was falling out of his mouth!”

The looks are exciting but it has been the improvement compared to his old bike that has Savoie excited. “The bike is going to be fast that pass we had this afternoon would have been 188MPH on the other bike and we went 190MPH on the new bike. There is definitely an improvement we just need to get the kinks out of it like the shift light hitting me in the head. Mark stayed in the shop till 4:30 this morning working to get out there today, so it had been a rough weekend for the whole team”

After three days of qualifying Savoie is ready for eliminations Monday morning having full confidence those runs will be much better then his qualifying runs since they are in the process of working out some of the kinks. “We get Karen Stoffer again for the fourth time this year I think. We will see and I will do my thing and hope for the best.”

Eliminations begin Monday morning at 11AM