NHDRO Dragbike Racing Gets on the Good Foot at Gateway

NHDRO—the Midwest’s largest motorcycle drag racing series—brings its track-blistering, good time, high-speed circus to the St. Louis area’s Gateway Motorsports Park for the first time ever. Gateway will thrill to the spectacle of two wheeled speed and culture in a way that hasn’t happened since AMA/Prostar scorched the track with St. Louis Chaos some 10 years ago. 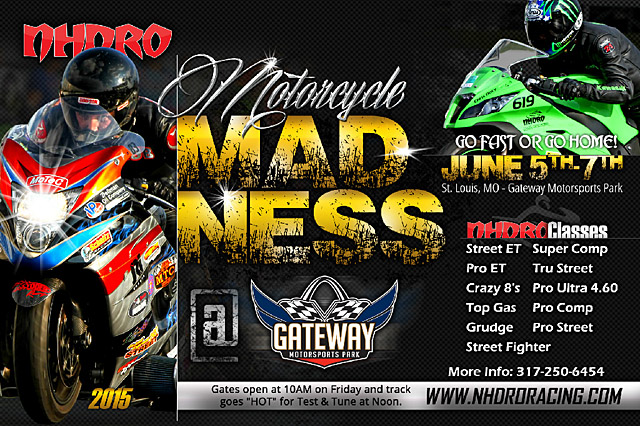 McIntosh Machine & Fabrication Pro Street bikes heat up the track like no other. Applying massive amounts of turbo or nitrous power through a street legal tire is a skill few riders and tuners can handle. Indy winner Bud Yoder is up to the challenge, though, as is his teammate Mark Paquette. Their turbocharged Suzuki Hayabusas will be set on “kill” as they test the limits of adhesion and gravity.

Yoder and Paquette will have a fight on their hands from defending Pro Street champion Jeremy Teasley on the John Drake-owned, fluorescent “No Fear” turbo ‘Busa, and his young teammate DD Boulware. Not to mention the battle that will be put up be former champ “Mothug” Doug Gall, Frankie Stotz on his Honda CBR1000RR, quickly improving Ryan Hable, last week’s IDBL runner-up Michael Bayes, Indy’s Justin Doucet, Rudy Sanzottera and his St. Charles based Quicktime Motorsports stable, and many more.

Quicktime, along with Lindeman Performance, will also be sponsoring the world’s quickest two wheeled index class— Pro Ultra 4.60. Jeff Lindeman’s rider Les Stimac will be looking for revenge against Indy winner Courtney Wheeler, and don’t be surprised if the bike count doubles for this fast growing addition to the NHDRO show.

Some guys don’t want to run within an index though. The true monsters of Gateway will be found in the Pro Comp field—fire-belching beasts like turbo/nitrous/gas Funnybikes. Pro Extreme Motorcycles like Man Cup champ Brunson Grothus’ nitrous-huffing, big cube Suzuki GS. Current generation powerplants like Chris Cutsinger’s ‘Busa Funnybike. Even injected nitro bikes—whatever it takes to get to the eighth mile quicker than the next guy!

MSP True Street also runs to a short eighth mile finishline. With real hand clutches and an instant green light, True Street favors the edgiest riders and most aggressive tuners. Teasley won the first race in Indy on a ZX14, but Gall and NHDRO’s “Uptown Funk” ‘Busa will be out for revenge. Expect this class to see significant growth as well.

Millennium Trailers Super Comp champion Brian Selner will seek to overturn his Indy loss to Charleston Chad Isley, but both will likely have to deal with the entire Wagner family of St. Louis if they are to have any chance at the Gateway winners circle.

Streetfighter slows the index down to 9.50. Champion Ron Arnold is antsy and looking to get back into the winners circle, but Indy runner-up Rocky Ward and many others will be out to see that he doesn’t.

Most of these guys will also be racing in two nights of Dennis Insurance Street ET and G&G Metal Spinners Pro ET, and Friday night’s Gamblers Race as well.

But we all know what Gateway’s about…it’s about the nighttime. Port-Tech Grudge will take over the quarter mile for hours of free-form match races, trash talking, and the best hangout scene in all of motorsports. Enjoy the laid back atmosphere while you can, because grudge will get VERY serious when NHDRO hits Louisville’s Ohio Valley Raceway on July 10-12.