NHDRO Dragbike Racing Family is Back in Action

The long winter for the NHDRO family is finally over, as the Midwest’s largest

Fest on the super-fine quarter mile at Lucas Oil Raceway in Indianapolis, May 15-17.

Famous for its close racing and good-time family reunion atmosphere, the NHDRO

picks up where it left off in 2014 with September’s hugely successful Finale. 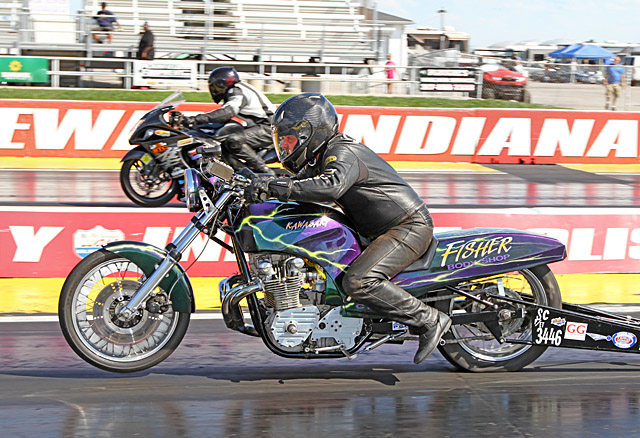 records of the time, running the class’ first 6.80something with a knockout 6.84. Teasley

then swept the weekend—winning the race, the rain-delayed August race, and the Pro

this first NHDRO event of 2015. Put that in your grille and chew on it John Force!

post-apocalyptic outback. Bud Yoder’s now had a year of sorting out his McIntosh

quicker! Fearless Paquette went a 6.88 on the bike’s first-ever full pass this past April in 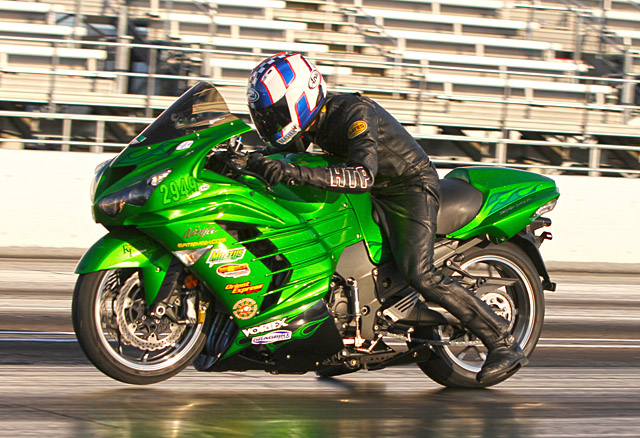 veteran Chicago racer Phil Stoll on Ronnie Mitchell’s pink “Frenchy.” It was at this event

D.” Bayes and the blue beauty are back and bangin’.

In addition to the standard points race, all the Pro Streeters will likely be throwing down

Funnybike in the off-season, and will concentrate on Pro Street this year. That opens

NHDRO is debuting new classes this weekend, including Pro Ultra 4.60 and MSP True

Street. 4.60 index is the hottest class all across the country, growing at a phenomenal

rate. It’s the perfect number for all the Pro Mod bikes that can’t approach the 3 second

timeslips that sometimes show up at PDRA races. Pull it out the garage, fill the blue

bottle and line it up yo!

MSP True Street is for serious riders only—and those that wanna be. From the instant

a weak heart beatin’ beneath the leathers. And oh yeah, the scoreboards are ON.

NHDRO’s “Uptown Funk.” And rumor has it that Port-Tech’s Bill DeShong will be

Raceway. In his own calm way he’ll be battling the likes of “Kounselor” Kenny Schwartz,

Cat” Ceslie Shellhaas, and Jim “Put it on the Underhill tab” Underhill, to name a few.

Teasley is also the defending Crazy 8s champ, squeaking out the season title on a

both have to deal with no-bar index wizards like Brad Gott, Clark Proctor and more.

scores of others in defense of his crown.

championship on the racetrack, not with his checkbook. He’ll have to fend off bracket

Rod Bland, Craig Treble, and hordes of others.

clutch plate, but he did score the Dennis Insurance Street ET championship. He’ll be

and scores more.
All class champions will be sporting the new, personalized Route 21 custom leathers

they earned with their titles.

Nighttime is the right time for the big money, trash talking, fun-loving scene that is Port-

‘Busas like “Lawd Have Mercy,” the MSP-built “Texas,” and any other combos with the

guts to pony up. And “Venom” is making a comeback. Now MSP-built and tuned, it’s

time for “Venom 2: The Remix!”
And speaking of class acts, never forget that the never-topped and impossible to

stage the NHDRO staff can cobble together. Trailers always empty to watch this scantily

clad comedy revue.
Brian and Niki Welch and the whole NHDRO staff invite everyone to chill beneath KD