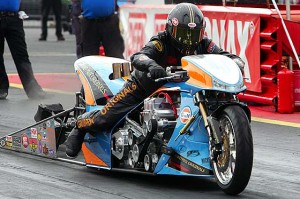 British rider Ian King and his Gulf Oil Dragracing – Grand Prix Originals Top Fuel Bike team returned to the Alastaro Motorpark in Finland following their strong showing at the previous round in Sweden intent on extending their points lead in the European Championship.

The rain showers that had affected the first two events of the year seemed to be a
distant memory during the two days of qualifying, but erratic track conditions
did not bode well for the more powerful nitro powered machines, and a number of
surprises in qualifying and eliminations upset the formbook.

After a watching a number of machines cross the centerline whilst battling the low
traction and infamous `bump’ in the right hand lane, it fast became apparent
that the event would turn into what would pretty much be a one lane track.

That proved to be so, but the left lane was still not providing the level of
traction that would bring out the best performances of Europe’s finest racers.
With that in mind records of any description were not anticipated by many. 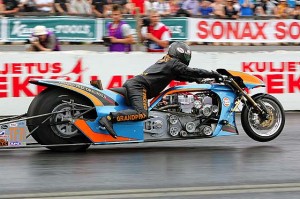 However, the team managed one impressive and crowd pleasing effort in qualifying,
notching up a fine but early shut off 6.197 seconds @ 216 mph to head
qualifying by a large margin and reset the Alastaro track record that had stood
for a number of years.

Semifinals saw King paired against Sweden’s Nils Lagerhöf and his NC Racing entry.
Despite Lagerhöf’s closeness to King in the points battle the British rider was
favourite as the Swede had yet to display six second performance in the season
to date, and King’s choice of the left lane put Lagerhöf in the more tricky
right.

But just as the two riders prepared to start their machines an event occurred that
changed the situation completely, and left the Gulf Oil – GPO team in a quandary.

The rider in the left lane of the previous session laid down a huge strip of oil
almost the length of the track that required detergent washing and rigorous
attention by the track crew for the ensuing 45 minutes. Knowing that the track
was likely to be `unreliable’ (even after cleaning) King would have usually
opted to change to the right lane, as was his right as the quicker rider in the
previous round. But, having seen the wayward (and dangerous) moves made by
number of cars and motorcycles in the right hand lane on previous runs King
opted to stay with the left.

That was to prove King’s undoing as just after his machine left the line he lost
traction completely, with the bike making a move to the right and necessitating
a roll off of the throttle. And this just happened to coincide with Lagerhöf
running his best run of the season and a six second pass to boot.

King’s loss to Lagerhöf was very much in keeping with the pattern of upsets in the two
nitro categories, but the weather front that moved in and resulted in the
cancellation of the event before any further rounds could be run kept the
damage to King’s points lead to a minimum.

The team travel next to Hockenheim, Germany at the midpoint of the Championship leading both the European and the
UK Championships for the home event of their primary co–sponsor Grand Prix
Originals.

The team are to contest all remaining rounds of the premier international championship in motorcycle
dragracing, the UEM Dragracing Championship:-

McBride to Debut Parachute at Norwalk Night Under Fire Aug. 11