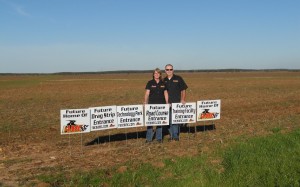 Since the February 9, 2011, announcement of the Americus Motorsports Complex (AMC), the Star Racing team has been working tirelessly on the lengthy planning and approval process required for such a large facility. After more than 30 years in the motorcycle drag racing industry, Star Racing owners George and Jackie Bryce are utilizing their own experiences and the knowledge of others in the industry to ensure that this motorsports complex is a world class facility with as few hurdles as possible along the way.

Before the Americus Motorsports Complex was announced to the public, meetings had been underway for nearly a year with the Americus-Sumter County Payroll Development Authority (PDA) to secure a proper location for the facility. At the time, the PDA owned the 449 acres of farmland directly across from South Georgia Technical College (SGTC) and suggested it to the Bryces as a potential land purchase for them to build on. The PDA had owned these parcels of land since 2002.

However, before the land could be sold for the purpose of building the AMC, it had to be rezoned by the Sumter County Planning and Zoning Board from a RR-Rural Residential District to a C-3 Commercial Recreation District. After a 45-minute hearing with a full house of local citizens, the Planning and Zoning Board unanimously approved the request on Feb. 3, 2011. It was announced publicly the next week that Star Racing was the company behind the future facility.

By mid-summer, the Bryces signed a purchase agreement with the PDA to secure the 449 acres of land, after more than a year of meetings and talks. The purchase agreement states that in the event that proper payments are not made by the AMC, ownership of the land reverts back to the PDA. The agreement also has provisions to prevent the Bryces from selling or developing the land for something other than the already stated purpose of a motorsports complex.

After finalizing the purchase agreement for the AMC land, the Bryces enlisted the help of Paxton Waters Architecture for the design of the complex and chose local company Harrell & Jackson Inc. as the engineering firm for the project. With more than 30 years in architecture, Paxton Waters has been involved in the design solutions on numerous speedway facilities, including the Las Vegas Motor Speedway, California Speedway, Iowa Speedway, Prairie Hills Motorsports Club, Bluegrass Motorsports Club and more. Gary Harrell and Brian Jackson, of Harrell & Jackson Inc., have more than 45 combined years in the engineering field. They will act as the project managers for all construction aspects of the motorsports complex, including wetlands permits, topographic surveys, bid administration and the overall building process.

“We realized early in the process that before any dirt can be moved, there were several steps we had to take to make sure that the construction wouldn’t be stopped later on,” Jackie said. “We have many friends in the industry that had great ideas and good intentions for building a track or dragstrip, but their plans were interrupted because they didn’t foresee a step or problem in the process. From the beginning, George and I just wanted to make sure that we plan for everything and learn as much as we can from others’ mistakes so that we don’t make the same ones. We wanted to get all the hurdles and red tape taken care of beforehand,” she said.

One such hurdle was the need for Federal Aviation Administration (FAA) approval for the AMC site plan. This authorization was necessary since the Runway Protection Zone (RPZ) for the Jimmy Carter Regional Airport across the street extends through the eastern corner of the AMC’s land. Due to RPZ restrictions, the original Americus Motorsports Complex site plan had to be readjusted to comply with the federal requirements. During the redesign process all of the original elements of the complex were kept in the plan and simply rearranged on the property. After approximately three months of waiting, the FAA recently announced their approval of the revised site plan, allowing Star Racing to move ahead in the process.

“When we were meeting with the PDA all those months before signing the land deal, we knew there were wetland areas on the property that we would have to deal with after getting our final site plan,” George said. “That’s where we are now in the process; getting the wetlands mitigation taken care of. It’s basically just a matter of getting the mapping for these areas and figuring out how many acres of wetlands credits we have to buy. It’s all determined by how much dirt we need to move to build everything, which is why we couldn’t start this part until after we got the final plan approval from the FAA,” he said.

The next several months of the process will involve the wetlands mitigation and the topography mapping that is necessary for the engineering and bidding phases. After a building plan is in place, all construction bidding will be handled by Harrell & Jackson Inc. and priority will be given to local and state companies with experience in this type of project.

A local investor for the project contributed the funds for the topography mapping, which is extensive with such a large piece of land. Meetings with other potential investors have also been underway throughout the process, with one interested party signing a Memorandum of Understanding for his involvement in the AMC. Several financing, investment and loan options have been included in the Americus Motorsports Complex business plan, formulated by Rob Ginn, Strategic Business Manager of the Georgia Tech Enterprise Innovation Institute.

“Our business plan was created to best suit our community’s needs,” George said. “There is absolutely no taxpayer money involved in this project, and the only involvement with government bodies so far was buying the land outright from the PDA. Other than that, we haven’t asked anything of the taxpayers and community except for their support. We’re confident that AMC’s success will garner full support from everyone when it’s all said and done.”

Although official construction has not begun on the Americus Motorsports Complex, there has been a small amount of activity on the property already. Charles Israel, a local farmer and friend of the Bryces, was hired to harrow the front section of the land because the grass and weeds were becoming unmanageable. The Sumter County Board of Commissioners was also hired to install temporary culverts and driveways on the property. The most recent change to the land is the placement of entrance signs for the future dragstrip, road race course, technology park, and training facility.

“The AMC won’t just be a dragstrip or road course; it’ll have many different things to keep it in use as much as possible,” Jackie said. “The new signs on the AMC property look great. We hope they help people visualize everything that’ll be included in the complex. We know our local community will play a big part in the success of AMC, and we hope to get everyone onboard before any dirt is moved.”

To inform the public about the plans and potential for the AMC, the Bryces have made countless appearances and speaking engagements since the February announcement of the complex. The couple gave the keynote address at the 10th annual Griffin B. Bell Convocation at South Georgia Technical College. Jackie has also presented the complex and fielded questions at a number of local community and government groups, including the Sumter County Board of Education, Americus Kiwanis Club, Americus Rotary Club, Sumter County Citizens for Fair Treatment, River Valley Regional Council, Americus Area Employer Committee, Cordele Lions Club and Cordele Rotary Club, just to name a few. The Star Racing team also traveled to Orlando, Fla., from Dec. 1-3 to represent the Americus Motorsports Complex and Star Racing at the Performance Racing Industry Trade Show with more than 35,000 attendees from the motorsports industry.

In addition to these speaking engagements, Jackie is a member of the Americus-Sumter County Chamber of Commerce Board of Directors, the Americus-Sumter County Tourism Council, the SGTC Motorsports Vehicle Technology Advisory Committee and the SGTC Law Enforcement Academy Advisory Committee. Through these positions, she is an advocate for positive economic growth within the community.

For more information on the Americus Motorsports Complex, visit RaceAMC.com. You may also e-mail questions or comments to info@raceamc.com or call Star Racing at 229-924-0031.

Schnitz Sale of the Week