Several Americans will be travelling around the world to compete at the Gulf Western Oil Winternationals at Willowbank Raceway, with Ashley Sanford (Speedflow Top Fuel) and Katie Sullivan (Serco Pro Bike) ready to take on Australia’s best drag racers. Top Fuel Motorcycle racer Mitch Brown will also be on hand to provide tuning support. Cycledrag.com’s Jack Korpela will also be there covering all the action.

While Sanford has become a regular at Willowbank at the wheel of a Rapisarda Autosport International Top Fuel dragster, this will be Sullivan’s first time down under.

The 28 year old rider has met many Australian riders during her years competing in the NHRA Mello Yello Series and is looking forward to getting to battle them on the track.

“All of (the Australian racers) have been a blast to get to know,” she said. “I know this experience is going to be the time of my life. One thing that makes racing funny though is that once you put that helmet on it feels like it’s time to go to battle, no matter where in the world you are.

“I love everything about racing, especially the competition aspect of it. I’m sure that racing at a new track in a different country will feel a bit intimidating at first, but once my helmet goes on I will feel right at home.”

Sullivan has plenty of links to Australia herself, with her engine builder being former Queensland resident Rhett Lougheed, who will travel to Australia with the team to tune the 1853cc Suzuki. Once Sullivan arrives at Willowbank Raceway, she doesn’t intend to go home empty handed.

“For years Rhett has talked about taking our bike to Australia to compete,” Sullivan said. “We always dreamed about it, but never quite had the right opportunity before now. A lot of great people have stepped up to help make this trip happen and it has really touched my heart. Force Wear Group is our primary sponsor headed into this event and we wouldn’t have been able to do it without them.

“Whenever I go to a race, my goal is always to perform well. I have learned over the years though that a big part of that is having good chemistry with your team and having fun. I’m fortunate that I get to bring most of my amazing team with me including my fiancé Greg Justice, my engine builder Rhett Lougheed, and my brother Chance Sullivan. The only bummer is that my dad, Charlie Sullivan, was unable to come with us on this trip. Our goal as a team is always to make as few mistakes as possible and my guys do a really great job of that.”
While many Australian sporting codes have begun separate leagues for women, drag racing is one of the few sports where men and women compete evenly. It was the dominant performances of three times NHRA Pro Bike champion Angelle Sampey in the USA that inspired Sullivan to make Pro Bike her chosen class. 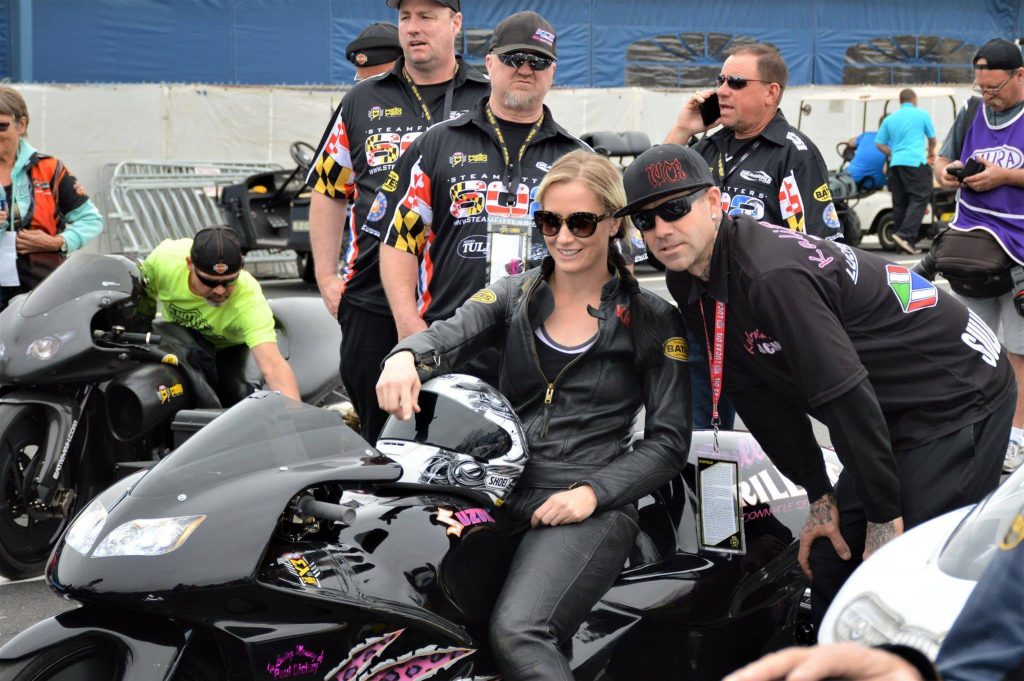 “My favourite part of drag racing is the fact that it doesn’t matter if you are a man or a woman,” she said. “Once that helmet goes on, we are all equal competitors. When I was a kid, I used to watch Angelle Sampey and Karen Stoffer beat up on the boys and I always thought it was the coolest thing. It’s my favourite thing about competing in Pro Stock Motorcycle, gender has nothing to do with it. Of course, I love riding fast motorcycles too!”

The Gulf Western Oil Winternationals runs from June 6 to 9 at Willowbank Raceway. Tickets are available online at www.willowbankraceway.com.au or at the gate.