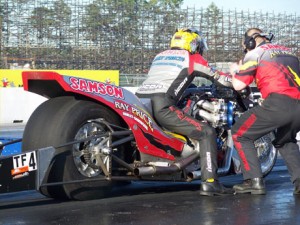 AHDRA announced today the signing of Gainesville Harley-Davidson as the Presenting Sponsor of the AHDRA-Florida Nitro Nationals, which is expected to be the largest season opener ever for AHDRA.

Gainesville Harley-Davidson, General Manager, Kevin Lytle says he and his staff are extremely excited about the event. “It’s absolutely perfect. It’s exactly what we have been looking for to market the Harley-Davidson product. It’s a top-level track, and a top-level event with a great product to promote. We’ve been involved in several racing events, including ProStar and the Gatornationals, but never to this extent. Sponsoring the AHDRA event is just perfect.”

Racing action gets underway at Auto Plus Raceway at Gainesville, Saturday, April 21st with qualifying at 10:00am. On Sunday, April 22nd, eliminations for Pro classes kicks off at 12:30pm with Sportsman classes immediately following.

AHDRA President, Craig Tharpe says, “fans can expect to see the largest field of competitors in the history of AHDRA.  It’s going to be huge. We are very fortunate to have continued great support coming from Screamin’ Eagle Performance Parts and Gainesville Harley-Davidson and it will no doubt be our biggest debut ever.”

Admission to the Florida Nitro Nationals Presented by Gainesville Harley-Davidson is $50 for 2-days and single day passes are $30. Children under 11 are admitted free, active and reserve Military are admitted free with valid Military ID and H.O.G. members receive a $5 discount at the gate.

Reservations must be made by April 4, 2012 in order to receive the special rate.

For more information on Auto Plus Raceway of Gainesville, visit: http://www.autoplusraceway.com