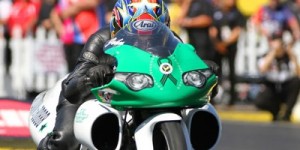 Second year NHRA Mello Yello Pro Stock Motorcycle racer John Hall has established points paying consistency, going to the semifinals this past weekend at the Summit Racing Equipment NHRA Nationals in Norwalk, Ohio. Add in his recent win at the inaugural New England Nationals in New Hampshire, and you’ve got a breakout season for Hall—a Connecticut real estate investor with a long history of racing no-bar bikes in the former AMA/Prostar series.

Hall and his Matt Smith Racing / Viper Motorcycles Buell were quick right off the trailer in Norwalk, running a 6.95 that was good enough for second in the first round of qualifying. “Then we kept getting bumped down a little bit,” Hall said about the next two qualifying rounds. But when he improved to a 6.942 at 193.07 mph in the final round, he was able to turn the tables around a bit. “We matched Adam Arana on ET but beat him on MPH, so he got bumped down.”

Hall finished fourth in the qualifying order and Arana—whose fortunes seem to have paired with Hall’s this year—was fifth. 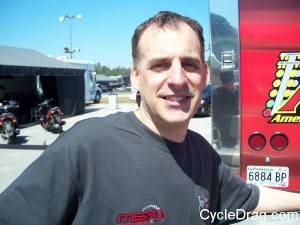 The opening eliminations round opponent for Hall was Mike Berry, who got a slight .005 advantage off the line. But Hall’s Buell had the right combination and while Berry backslid, John improved and took the round. “We had a good tune-up,” said Hall. “We improved from 1.08 to a 1.06 60 foot time. We just had the right clutch set-up for the track right then and I hit my shift points.”

Then came a round 2 match-up with Arana, the runner-up in Hall’s final round win at New Hampshire. The Norwalk result was similar, with Arana again posting a -.070something redlight. “Adam’s definitely an up and coming star in the sport and I’m happy to get all the wins I can against him while I can,” said Hall. “He’s never raced anything before this year and he’s improving leaps and bounds every race.”

The next round was also a New Hampshire rematch, but this time the result went the other way. While Hall was able to race past teammate and tuner Matt Smith in Epping, this time he got snuffed. “I had some tire shake the top of first gear, which sent me out of my groove a bit and I short shifted 2-3 pretty badly,” said Hall.

Smith went on to win the event and joined his dad Rickie in the Norwalk winners circle, in what has become a very successful stretch for the Matt Smith Racing/Viper Motorcycle team. “We’ve been to three straight finals with two wins,” said Hall, who also noted that his former Star/Sovereign team has been similarly successful and that the Aranas started the season in near dominant fashion. “Any of the16 bikes in the field can win a race.”

Currently fourth in points behind Smith and ahead of last year’s teammate Scotty Pollacheck, Hall is looking forward to continuing the team’s run in the NHRA’s upcoming western swing.

Sovereign-Star Racing claims No. 1 qualifier, advances to final round at Norwalk