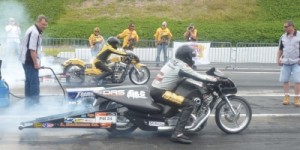 Off season from racing is not a time for meditation and relaxation, it’s time to get new parts, sometimes new paint, make deals with sponsors, and set the season’s calendar.

In 2012 Frank Capone of Capone Racing won his first National Championship in the Pro Mod class with AHDRA.  Capone and Shaun Reno, Team HeadBlade set numerous records with AHDRA. Capone had intended to defend that Championship this season when the news came about the demise of that long time sanction.

Both teams now plan to persue records and Championships with the AMRA and will run NHRA Screamin’ Eagle divisionals on the East Coast and Midwest and possibly the NHRA finals in Las Vegas, NV.

“We encourage our friends and fans to make this conversion with us, it’ll be new tracks and new competition and we’re ready,” says Capone.