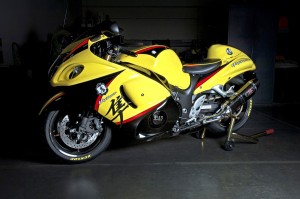 James Stewart has signed a multi-year contract with Yoshimura Suzuki Racing and will be competing for both Motocross and Supercross championships aboard the Yoshimura Suzuki RM-Z450. As a ‘Welcome to Suzuki’ gift, American Suzuki Motor Corp. presented James with this custom, one of a kind, Yoshimura-built Hayabusa during the 2013 Suzuki Dealer Convention at the Rio Hotel in Las Vegas today. In addition to custom paint and graphics sporting Stewart’s JS7 logo, the bike has also been outfitted with a gorgeous pair of BST carbon fiber wheels, with ceramic bearings, provided by Brock’s Performance. A Brock’s offset top clamp and window links lower the chassis to finish off its ‘street-prowler’ stance. The JS7 Custom Busa is scheduled to display in the American Suzuki/Yoshimura R&D booth during select Progressive International Motorcycle Shows. 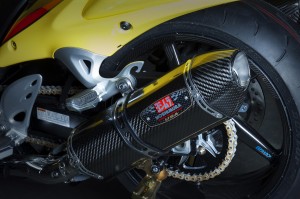 Based near Johannesburg, South Africa, BST engineers and manufactures the world’s finest carbon fiber motorcycle components–from wheels and frames to fuel tanks and fenders–to the highest international standards. On the world stage, BST wheels have been proven at every level of FIM Grand Prix road racing competition and have won 12 national championships.

Stoffer Signs off With Quarterfinal Finish