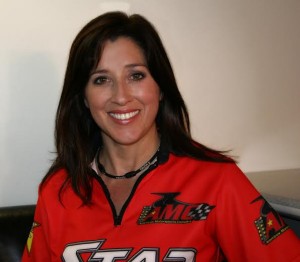 NHRA Pro Stock Motorcycle three-time champion Angelle Sampey’s late-season return to drag racing has come to a screeching halt.  On Friday Sampey announced that she badly cut the back of ankle while unloading a starter cart during the Toyota NHRA Nationals from Las Vegas, Nev. Sampey was unable to participate in the event and today announced on Facebook,

“Well it wasn’t what I hoped to hear. Surgery on Wednesday morning. Doc said he is very impressed. I tore a ligament that he hasn’t seen torn the way I did it in a really long time. Somehow I managed to tear the Peroneus Brevis tendon in half. This tendon is between the Fibula and another tendon that would normally be torn first. I also tore the Achilles worse than we originally thought. It’s torn half way but still intact. Down time will be 3 months. 6 weeks in a cast and 6 in a boot,..then we start rehab. Thank you all so very much for the love and support you have shown me. Especially for your prayers. I may be down but I am not out!! The good Lord has just given me a little challenge that will make me stronger in the end,.. And I accept.”