As of Thursday evening the AMRA is on!

Midday Thursday the NHRA announced the postponement of one of its biggest events, The Gatornationals from Gainesville Raceway, after days of standing firm that the race would go on as planned with extra added precautions to combat the potential spread of the Corona virus. The list of Corona-related cancelations continues to grow rapidly with the NHL, NFL, NBA and MLB joining many other organizations in canceling public gatherings and events. 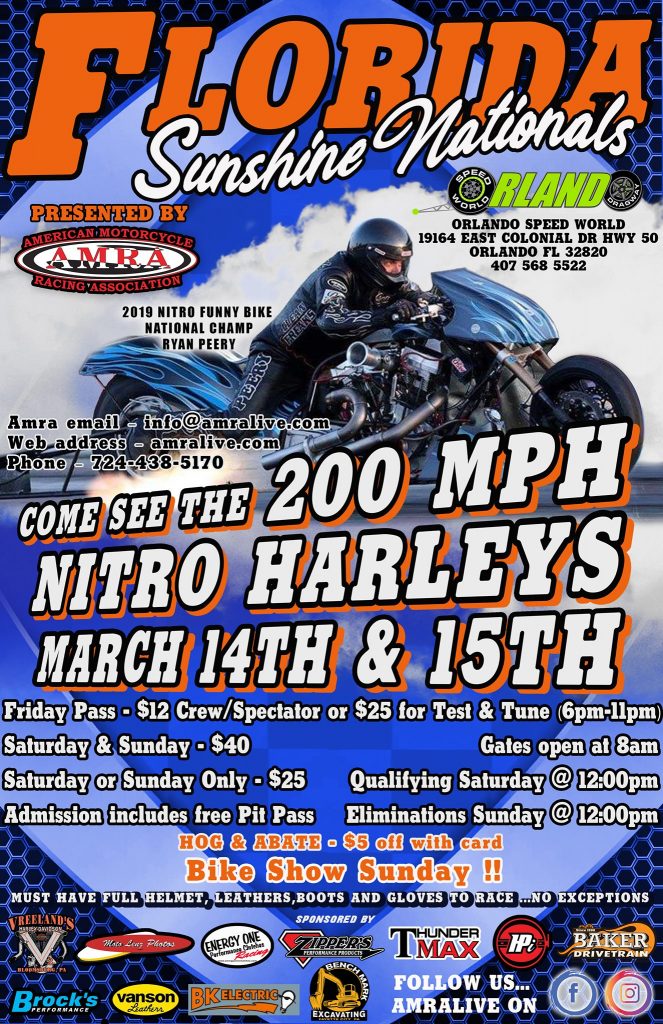 Not all events have been cancelled. As of Thursday evening The AMRA’s (American Motorcycle Racing Association) season-opening Florida Sunshine Nationals, about two hours south at Orlando Speed World, remains on with no plans to cancel according to the AMRA’s Greg Baugh.

Baugh says multiple NHRA Pro Stock teams, including the squad of former AMRA  standout Ryan Oehler are headed south to take part in the event as an exhibition.  Baugh says even Pro Stock Suzuki teams are welcome to come down and test in light of the postponement of Gainesville. Even some Pro Mod car teams have reached out to Orlando Speed World about the possibility of testing.

When asked whether the event is in jeopardy of facing a cancellation, Baugh said he, along with track owner Ozzy Moya, feel the AMRA is a small enough gathering to go on without forced interruption, as opposed to Gators, expected to draw more than 100,000 people to Gainesville Raceway throughout the weekend.

“We are here and we plan to run this race until somebody tells us otherwise,” Baugh said. “We have plenty of teams in the pits and everyone is welcome.”

It appears the only action that could cancel this event would be some type of mandate from local officials. NHRA cited a recommendation from the Governor as one of the reasons for their postponement.

As of Thursday night, the AMRA is a go.