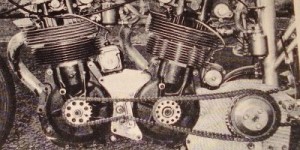 Motorcycle drag racers were no different from car drag racers. In addition to looking for ways to increase the performance of their engines, they also looked at ways of adding a second one. The car guys had done it as early as 1951 when the “Bean Bandits”—Joaquin Arnett and Carlos Ramirez—had competed in a Mercury powered by a pair of flatheads.

The machine used a Triumph frame that had been stretched nine inches; Triumph 650cc engines running a mixture of 80 percent nitro and twenty percent benzol; and a Harley-Davidson clutch and transmission with second and fourth gear only. A Triumph hub was used at the rear along with a Harley-Davidson wheel and car slick. 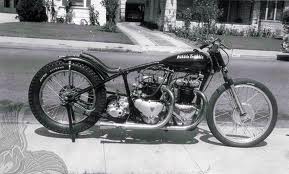 Although a number of cutting-edge machines came out of Hare’s shop, the shop itself was anything but. As Triumph racer Don Harris recalls, “The roof was falling in and there was literally a dirt floor. His stuff looked like crap but boy could he make a motorcycle run!”

Part of what helped them run was Hare’s incredibly innovative mind. He was, among other things, the first to reverse the direction of the cylinder head to give the incoming air a more direct path into the carburetors, and also one of the first to use splayed ports—which was later incorporated by the Triumph factory. “I saw Bud 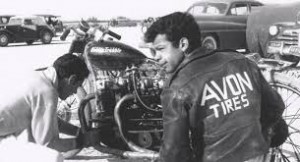 at a drag strip in the early Sixties with a Triumph,” said Bob Sirkegian. “I asked him, ‘Hey, what’s all them lines?” ‘I’m playing with something’ was all he would offer. It was nitrous oxide and in the Sixties!”

The machine is now owned by Glen Kerr of Swartz, Louisiana, who shows—and races—it as often as possible. 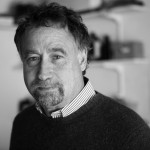