Steve Johnson Comments on Missing the Final Round in Dallas 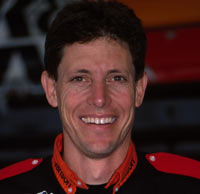 Sometimes the worse kind of loss is one where you don’t even get a chance to take the tree.

NHRA Pro Stock Motorcycle veteran Steve Johnson commented on missing the final round in Dallas against Andrew Hines, who encountered mechanical woes of his own and could only deliver a 7.50.

“We had two options. We could have put a motor in that would have had us up there in time and won the race knowing what we now know, or we could have put in the kick-ass-and-win-the-race motor. We chose the kick-ass-and-win-the-race motor, and we just missed the call. We’ve never hurt so many parts in one race. We were matching parts up with other engines and literally had three teams helping us do it. There was LE Tonglet’s team, White Alligator Racing, and people I didn’t even know. Three-time Top Fuel champion Larry Dixon was holding the bolts that I was grabbing out of his hands. We split [engine] cases and put the transmission from ‘A’ into engine ‘C,’ that kind of stuff. If I would have known that Hines was only going to go 7.50, I could have put in my ‘B’ engine and won the race. I wanted to tear their throats out. I wanted to have the performance we had all weekend long and win.”