The is some news coming out of Kawasaki that may downright shock you.

At the start of October, Kawasaki officially reformed its motorcycle business—previously called “Kawasaki Heavy Industries Motorcycle & Engine”—into a new company simply called Kawasaki Motors, and now the firm has revealed its plans for the coming years, which include a wholesale shift toward electric and hybrid vehicles.

At a presentation in Japan, where it also revealed the much-anticipated hybrid bike prototype and showed the latest iteration of the electric sportbike project that was first shown in 2019, Kawasaki revealed that by 2035 all major models sold in developed countries will be either battery electric vehicles (BEVs) or hybrid electric vehicles (HEVs). 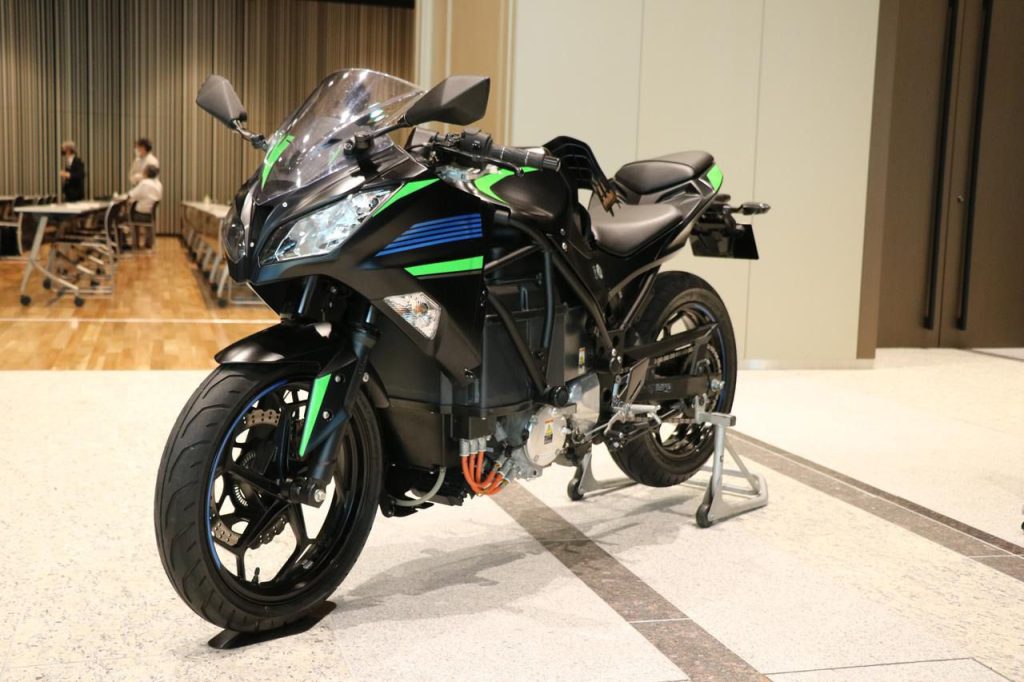 The electric prototype wears new graphics but likely doesn’t reflect the final design of a production model.Kawasaki
While 2035 might still seem a long way off, the first step of the process is much closer: The company promises to launch “more than 10″ electric or hybrid bikes by 2025—little more than three years from now. The same pattern is to be adopted for the firm’s four-wheelers, with five electric or hybrid production models due by 2025.

In terms of actual bikes, the only sight yet of an electric Kawasaki is the prototype that the firm first revealed in 2019, which was shown again at the firm’s new presentation, albeit with some new graphics. As we explained last year, it’s part of a project that’s been underway for at least a decade, and while it’s sure to have given Kawasaki plenty of insight and experience with electric bikes, it probably shouldn’t be considered a reliable indication of the design or specification of a future production model. 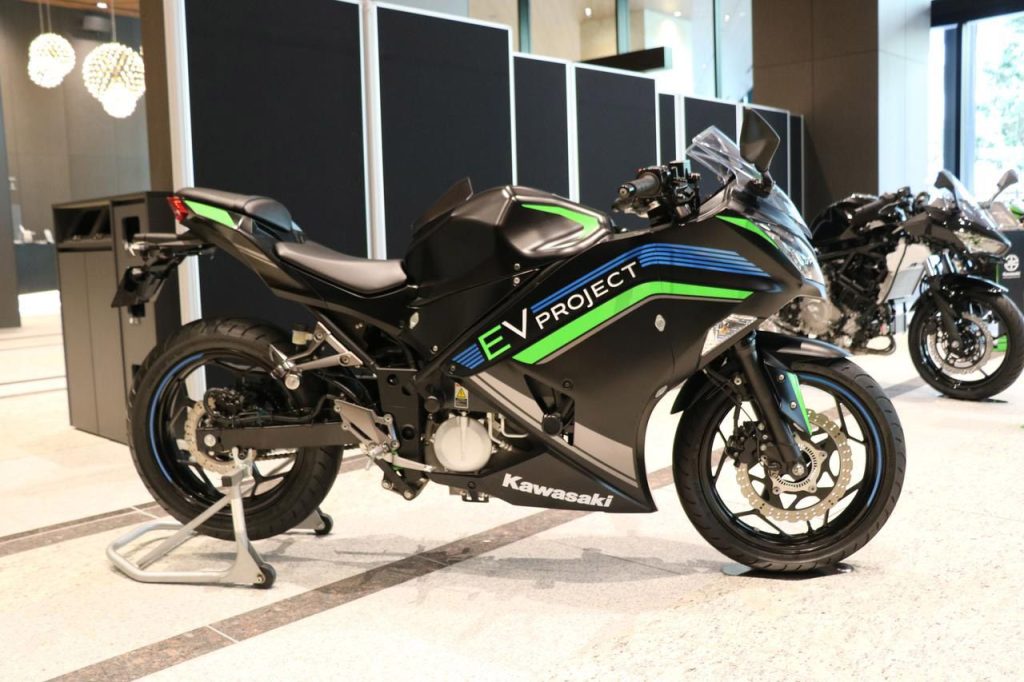 The new electric and hybrid bike onslaught doesn’t mean we’re about to see the end of combustion-engine Kawasakis. The company plans to go on a new model offensive over the next few years, simultaneously working on hydrogen-power ideas to develop ultralow-emissions combustion engines that could give a new lease on life to the tech that’s been at the heart of motorcycling since the very start.

For the road-going motorcycle range, Kawasaki’s plan is to launch an average of 16 new models per year by 2025, including gasoline-powered machines, hybrids, and electric bikes. Off-road, the firm will also develop a BEV and HEV range, but in the meantime is planning to launch 15 new off-road models, presumably mainly using conventional gasoline engines, by 2025. In terms of four-wheelers, the plan is again to adopt BEV/HEV tech and to be launching an average of eight new models per year by 2025.
The company has also reiterated its intention to continue to create high-end, high-priced bikes, with the Ninja 1000-powered KB4 expected to be revealed imminently as the first full-production model since Kawasaki took a 49.9 percent stake in Bimota in 2019.

The firm says it’ll also still be involved in the production of higher-end bikes like the forthcoming Bimota KB4.Bimota
Amid all this, Kawasaki has also officially adopted the River Mark logo, which has been used on the supercharged H2 models since their launch in 2015 as its new corporate identity. A stylized version of the Japanese character meaning river, the mark dates back to the firm’s earliest days as the Kawasaki Tsukiji Shipyard, formed in 1878. The mark will be used across all Kawasaki Heavy Industries’ products, including those from the newly formed/restructured Kawasaki Motors. 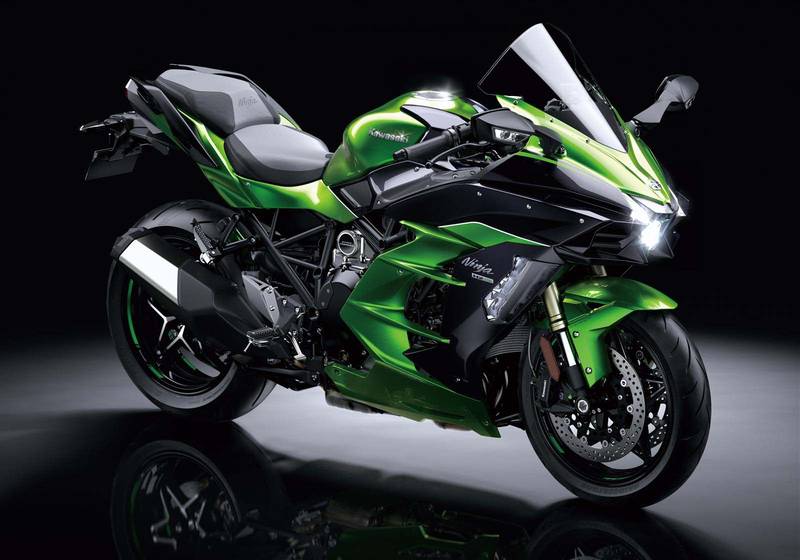 This wouldn’t be the first time Kawasaki took to the world’s foremost motorcycle show to unveil its electric ambitions.
Just two years ago at the last EICMA show before the pandemic, Kawasaki wowed onlookers with the first public revealing of its electric motorcycle ambitions.

A prototype electric motorcycle was unveiled as part of an EV development project, but little was known about the bike at the time.
It was apparent that the bike was built on a Ninja 650 base and featured a 4-speed gearbox, but that was about as much as the world could glean from the prototype on display.

Once Kawasaki shared the prototype bike’s specs though, the excitement quickly cooled.
With a peak power output of just 20 kW (27 hp) and a lower continuous power rating of 10 kW (13 hp), it was a Ninja in frame only.
But that was a whole two years ago, and Kawasaki could have something new for us to see at this year’s show.
It would certainly fit with the pace of development, as we’ve seen several patents for electric motorcycle designs come out of Kawasaki’s R&D department. 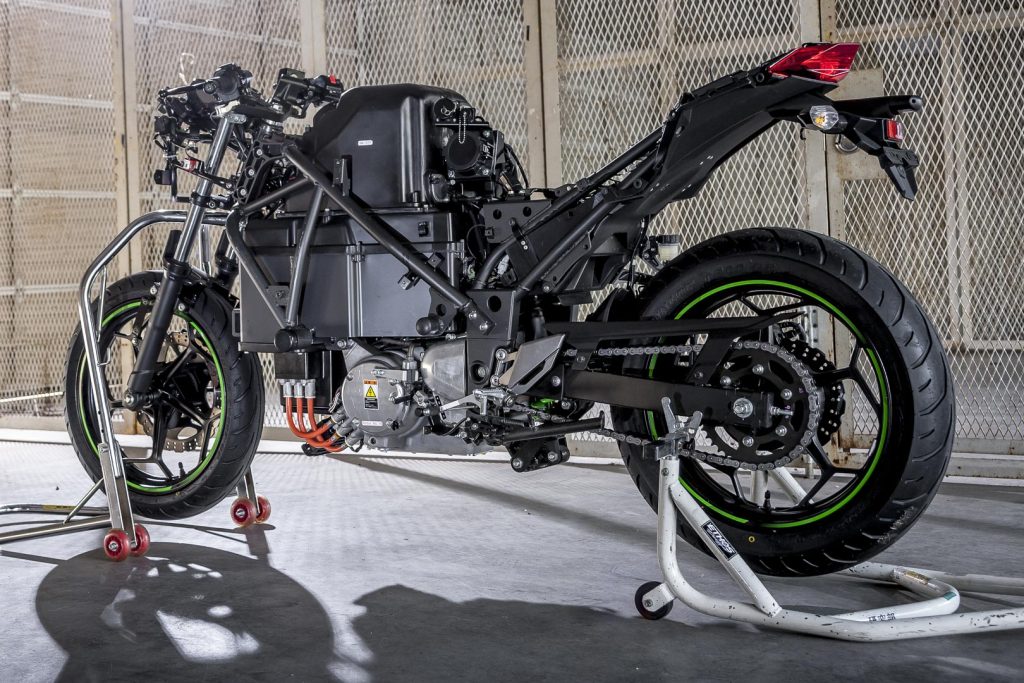 And considering that Kawasaki has pledged to convert all of its motorcycles to entirely electric power by 2035, the time is ripe for the company to finally roll out its first electric motorcycle.

Yamaha has similarly started with the lowest hanging fruit of minimal power electric scooters that are quicker and easier to develop, not to mention likely more profitable.

Suzuki is currently focusing on an electric scooter for the Indian market, which is expected to be released later this year.
All four had previously signed onto a consortium to develop swappable batteries for electric motorcycles, though we’ve yet to see any concrete evidence of developments from that agreement.

Should Kawasaki ultimately unveil a full-size electric motorcycle at this year’s EICMA show, it might have needed to develop its own battery without the help of other major Japanese motorcycle manufacturers.