Cox and Horne Team Up for 2013 Harley-Davidson Championship 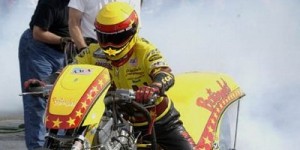 Mark Cox has joined the Horne Racing Team for the 2013 NHRA Harley-Davidson Racing Series. He and Douglas Horne will be competing on Harley-Davidson motorcycles in the Top Fuel class in a two-bike effort.

Mike Romine of Romine Racing, who builds and prepares the bikes for Horne Racing, is building a new bike for Mark Cox. Cox is anticipating racing in seven of the NHRA’s ten (10) Harley-Davidson events this season. Cox will also compete in selected AMRA events as well.

“We’re excited to be working with Mark,” said Steve Horne of Horne Racing. “We got into racing as a family with my son, daughter, wife and I. Mark is involved in racing with his Family, Mom, Dad and brother. That’s a positive and makes sense for all of us. He runs and conducts himself in a professional manner, which meshes well between us. We are going to be able to gather much more information by running a two-bike team. We can gather information twice as fast to move the entire team further quicker with the data we aquire.”

“I’m truly excited to be working with the Horne family and Mike & Patty Romine on an exciting championship run this season,” said Mark Cox, a former AHDRA Pro Dragster National champion. “We’ve got Bojangles back as our primary sponsor and it’s going to be great to introduce them to some new fans in NHRA. The innovative NHRA Series provides a higher profile series and we’re excited to see Harley-Davidson signed up with NHRA for four years with this thrilling Series.

“Although we had hoped to start the season at Houston on March 1-3, the new bike is not completed yet. We want to be ready and do some testing before we unload at the track for one of these races.”

“I know Mike prepares a meticulous bike and he knows how to fine tune his way to Victory Lane,” said Cox, of Fleetwood. North Carolina. “It’s going to be great to ride one of his tuned bikes with Horne Racing. In past years Cox and Romine competed against each other in the Top Fuel class with AHDRA and IHRA competition. With the youth and successful Douglas Horne and my experience and feedback of riding and racing, we expect to be a very formidable team out to attack the NHRA championship with our two-bike effort.”

Cox will start the season at Virginia Motorsports Park in Petersburg, Virginia on April 12-13, although Douglas Horne will compete at the inaugural NHRA race in Houston on an existing bike.

“Although we will miss race one, out of the ten races NHRA offers in the new series, only seven of ten counts for points. Starting at Virginia will still keep us on track for the championship hunt.”

Founded in 1977 in Charlotte, N.C., Bojangles’ Restaurants Inc. serves only the highest quality and most flavorful food to its loyal customers, with all of its proprietary menu items made from scratch. A special blend of seasonings gives the food its unique flavor, including Bojangles’ core menu selections of World Famous chicken, fresh made-from-scratch buttermilk biscuits and legendary iced tea steeped the old-fashioned way. Bojangles’ also offers biscuit sandwiches that are served all day. Unique sides like Dirty Rice®, Cajun Pintos® and Seasoned Fries™ are just a few of the flavorful fixin’ choices. First franchised in 1978, Bojangles’ boasts close to 500 locations in 10 states, primarily in the Southeast. The company was named one of the top 10 growth concepts in 2009 by both GE Capital and QSR magazine.  Its strong performance in all three day parts is what sets Bojangles’ apart from all other restaurants. For more information, visit www.bojangles.com.