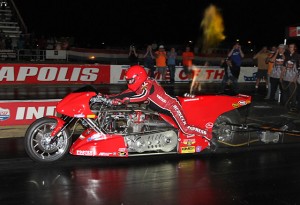 Top Fuel bikes show up in force to Indy with 4 blown Imports on the grounds.

The crew for this race consisted of the regular crew ,Crewchief Sharon Hand, Steve Legendre,  and Dick Boxell. And the additions of John, Barb, Chris, and Dave Alwine.

Steve beats me to the track Thursday night, I am about ½ hour behind. Steve has been in touch with Chris and Sharon and they are not far behind.
They pull in and we set the trailer in it’s spot and head for the motel.
John , Barb, and Chris arrive shortly after we leave the track.

We all head to the track Friday morning and get the Redneck pit area set up.

Chris has 3 motors ready, Merlin is in the frame rails along with Robert E. Lee, and Galahad, for backup .

Chris and John discuss tuneup, and Chris downloads the parameters.

Midday Friday we fire the bike getting ready for Fridays qualifying pass , and it sounds good so we perform final work to get the bike ready.

Since we are at INDY we know we are going to be running ¼ mile all weekend with good weather on tap. It is overcast Friday but no wet stuff and that is a good thing as the track won’t be blistering hot.

Call goes out and we tow to the staging lanes, Steve goes down track as Sharon runs the starter, we fire the bike, and I run to where Steve is waiting.
Chris brings the Redneck Express through the water box, and Chris Alwine has “agreed” to wipe the tire. Chris performs a smoky burnout out to where Steve and I are standing and start the push back, we push back watching John to guide us back and I mimic to Chris to line up on top of the rubber he just put down with the new MT Slick.

Chris pre-stages, Sharon turns on the Racepak, I take Tire and Track temps Chris stages, the bike blasts off the starting line, runs a 6.497@199.35

We get the bike back and leakdown is OK but the old nemisis is back and we take the top of the engine off and find bad things. We spend the rest of the evening healing Merlin and call it a night.
The numbers put us at #2 Qualifier

Saturday morning we ready the bike, fire it on fuel and it sounds healthy!
Chris looks at me after he hits it and has a grin.

Call goes out and we tow to the staging lanes, Steve goes down track as Sharon runs the starter, we fire the bike, and I run to where Steve is waiting.
Chris brings the Redneck Express through the water box, and Chris Alwine wipes the tire . Chris performs a smoky burnout out to where Steve and I are standing and start the push back, we push back watching John to guide us back and I mimic to Chris to line up on top of the rubber he just put down.

Chris pre-stages, Sharon turns on the Racepak, I take Tire and Track temps Chris stages, the bike blasts off the starting line, runs runs down the track but we do not improve on our earlier pass.
Vantine runs a 6.17 on Greg Pollards bike and bumps us to #3 Qualifier

We get the bike back and leakdown is OK but again the old nemisis is back and we start to service as usual but the call is made to put Galahad in service, he has had a vacation as we have been relying on Merlin for a few races straight.
While the engine is out and the left side is off John and I take a look at the clutch and end up replacing a few bits, and John shows me how he sets up a clutch pack from scratch,( he later says that is “ the only time I am going to show him (me) how to do it”) as the Boss and Steve take a look the oil pump.
We are assuming that we are going to miss the last qualifier and are very methodical and deliberate in the engine swap.

Then there is a major oildown!

The pace quickens in the Redneck pit area as we are thinking maybe we might make the pass. We are getting close then there is oildown #2, we are done now and ready to make final preparations to fire the bike, of course the idiot, (me) that is supposed to set the cannon didn’t, we get it set and fire the bike on the stand then Chris motions for Sharon to bring on the fuel, the awning fills up with Nitro fumes and there are escapees from under it.
Chris kills it and we top off the fuel and cool it down. By this time everyone is intent on getting the bike up to the staging lanes, and we make it just in time for oildown #3

Saturday Qualifying round 3. THE RUN

We gather the starting line equipment and follow the bike to the lanes.

We are the last ones there and as it is getting darker and I notice that only the lights on one side of the track are burning, but the Sun is not beating on the track and it is starting to cool off a little, as is the air.

As we are waiting John says to me “ I think he is going to do a 330 squirt and shut it off” I just grin and say to myself “I have made that assumption before” if it stays lit, and is on a run, the Boss is going to leg it.

Finally the call goes out for Top Fuel to suit up.
As we are the last ones and behind Larry, the crowd closes up in front of us and we have to yell at the starting line that there is one more Top Fuel bike to run. The crowd parts and lets us through and hangs around.

Steve goes down track as Sharon runs the starter, we fire the bike and bring it through the water box, Chris Alwine again performs tire wiping duty, As I am running down to where Steve is waiting I notice that the crowd in now 2 deep in FRONT of the wall!! I tell security to get them back!

Chris whacks it to another smoky burnout out to where Steve L. and I are standing is and starts the push back, with John guiding us. The bike sounds crisp and has a little different idle quality this time.
Chris pre-stages, Sharon turns on the Racepak, I take Tire and forget to track temps, Chris stages, the  bike BLASTS OFF THE STARTING LINE AND THE FLAMES JUMP 10 FEET OFF THE DECK OF THE BIKE, the pipes STAY LIT ALL THE WAY DOWN TRACK, MAN THIS THING IS ON A RUN!!!!.

The scoreboard tells the story,

The starting line and the loud speakers erupt, and we are surrounded by friends and well wishers, hugs and high 5s are shared with all.

We haul as many people in the golf kart as it will hold to greet the newest member of the MTC 5 second club, somewhere along here Sharon loses her voice and is hoarse the rest of the weekend.

I believe it was Larry who had the pleasure of telling Chris he did it.

We get to the shut off area and Chris is the happiest man alive at that moment, so long in coming, and so close on many occasions, that this was the pass and it was at Indy, a track he really likes to run at.

We get the bike back and leakdown shows us all OK, and the demon that plagued Merlin is not there!!!!

Chris receives many congratulations from everyone and it continued the rest of the weekend.

Chris after much thought says ” Seldom in the history of human endeavor has so much been owed to so many by one”.

We get to the track and finish final preparations for the first round of eliminations. Chris and John discuss tune-ups again and another download is the result.

We are scheduled to run Chris’s close friend, and chassis builder of the Redneck Express Sam Wills this round.

We roll the bike up to the staging lanes when they call and the opening ceremonies are performed.

Sharon rolls the motor over as I run the primer . Steve runs down track to get ready to push the Redneck Express back to the start line,
Chris rolls through the water box, and hits it to a long smoky burnout.
We push Chris back, and Chris pre stages and waits for Sam to prestage, then Chris sets the fuel system on fat, then high idle. I take Tire and Track temps
The lights flash the bike makes another leap off the starting line, gets out and runs straight to a win at 6.17@212.36 to Sams’ 6.925@174.66
We get the bike back and #1 is hurting a little from the leak down but its out the exhaust so the decision is to service the bike and get it ready for the final.
It’s amazing how your perspective changes after a really great run….

Elimination Round 2 the FINAL

Chris and John look at the data from the Racepac and arrive at a tune up, and Chris loads it in the bike.

Larry McBride is our competition for the final as he eliminated the bike of Greg Pollard with Dave Vantine riding.

Sharon rolls the motor over as I run the primer squirter . The bikes fire almost in unison, Steve runs down track to get ready to push the Redneck Express back to the start line,
Chris rolls through the water box, and Chris Alwine wipes the tire.
Chris and Larry look over at each other and I look at Steve and start to move farther down track as I know we are in for a long push back as they tend to have a burnout contest, they hit it at the same time and sure enough they are side by side coming at us tires smoking!!!!.
We push Chris back with guidance from John. Chris pre stages and waits for Larry to prestage, then Chris sets the fuel system on fat, then high idle.
The lights flash the bike makes a move off the starting line, gets out a ways then the Redneck Express moves up torwards the centerline and slows to a 7.061@137.58 and Larry Wins with a 6.237@224.10. One of these days we are going to have a better bad run than Larry!!!!.

We would like to thank the Indiana Motorsports Park , crews, staff , and the manufacturers that pulled together to put on this race.